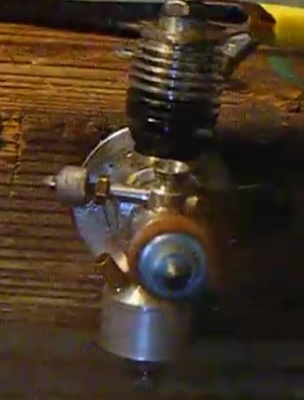 Produced in The United States of America in 1949 this little gem was a favorite with young people because it was easy starting and featured a integral fuel tank it was easy to mount and operate. With a displacement of a mere .020 cubic inches or (0.328 cc) it could be used in very small models which were easy to build and to fly. This design was also manufactured in a .035 size version in 1950 which could be recognized by its 4 fin cylinder, where the smaller engine sported 5 fins. See this old classic run now by clicking the object below.

For more information on other model aircraft vintage engines,don't forget to visit my other Blog at: http://antiquemodelenginesrunning.blogspot.com/
Posted by davideo4301 at 9:20 AM