Does anyone remember these? 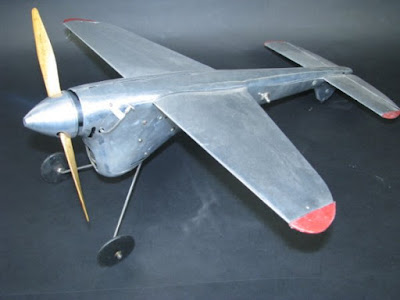 Topping Models of Akron and Elyria, Ohio is best known for its plastic manufacturer's display models, made for aircraft companies, and others, from the 1940s into the late 1960s; many of those are offered for sale on the Display Models page link. Topping also made gas model airplane items including plastic propellers, an adjustable-pitch prop, and an incredible, pre-formed aluminum control-line model, the Topping "100" which came out in December 1945 and was on the market for a year or so (can't find any 1948 ads). An almost ready to fly Ukie model, the Topping "100" was elegantly constructed of die-formed alclad aluminum, spot welded where necessary, and came in a box, ready to assemble, including a plastic three-blade prop. Assembly, however, necessitated the installation of an engine, which required measuring and drilling holes, making cutouts, aligning the crankshaft with the fuselage centerline and figuring out how to install a modified fuel tank and various ignition system components - not an easy task. A number of engine installations were pictured on the instructions but exact details of dimensioning and cutouts were not provided. A wet cell flight battery was indicated but not provided - there were several companies advertising the wet cells in the 1945-46 era. The model kit sold for $10.00 (without engine and ignition components). Example of the first Topping 100 kit as advertised.


An example of the earlier Topping "100" model, the "100" was obtained with an Ohlsson 60 Custom (1940 model with 1/4" prop shaft) installed and equipped with an Ohlsson glow plug. There were no signs that the model had ever flown, no indication of an ignition system nor had the engine been run in the model. The model was completely restored and returned to the ignition system as originally sold prior to the glow plug invasion after 1947. Ignition components for the Kettering system are of the 40s vintage with an Austin-Craft pen-cell battery box, a metal Perfect fuel tank, a metal clad condenser, and a Smith Competitor Coil with fuse-type mounting clips. The model was wired properly and has a battery switch on the L.H. side; the engine has a "V" type Champion spark plug. Component installation and control wires and leads are all in accordance with the original "100" instruction sheet; the instructions for this early version gave the option of either rotational direction of flight as wires could extend from either wing tip. The aluminum fuselage was made from two elegantly formed aluminum shells so that the right hand side could be removed (two screws - three on the Madewell version) for access to the inside without removing the wing or horizontal tail. Jogged tabs aligned the shell halves when closed. The raised Topping logo is formed into the right hand shell. 3-blade version of Topping 100 displayed in the AMA National Model Aviation Museum in Muncie, Indiana. CollectAir photo. 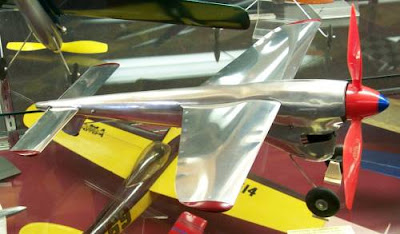 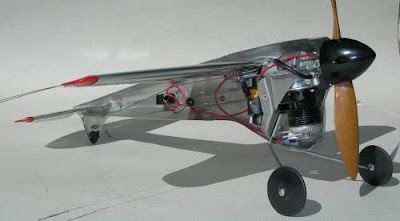 Although preformed, the early Topping "100" was a formidable project which many a modeler must have found out. A look at Topping advertisements for the "100" prove to be somewhat schizophrentic; as an example, the August 1946 ad in Air Trails is for the early version with "photograpghic guide for various engine installations" but the picture of the model shows a two-bladed prop with the new "wobble proof" plastic spinner. At some time later, the the two-bladed prop version became the factory-completed Madewell 49 version. This later model came equipped with a fine Madewell 49 lgnition engine and had cutouts for the timer arm, needle valve and fuel filler. All ignition components came with the model including a dry cell battery box, coil, condenser, switch and high tension lead. Included also was a wood propeller and the Topping "wobble proof" spinner and control wire with a handle - very complete. I can find no advertisements for this version of the Topping "100" in any of the model airplane magazines so I have no idea what the list price was with the engine (engine alone advertised elsewhere for $18.00 in late 1946), however if you add up all parts on the plan's "Parts and Price List", the sum comes to $34.65. One correspondent mentions purchase of the Madewell version at a Skelly gas station! 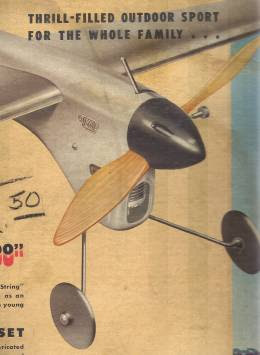 The instruction sheet for the early version was less specific than the plan which came with the Madewell version. A portion of the Madewell plan issalong with part of a November 1946 ad for the engine.The photos below picture the model being offered with the right hand, removable fuselage shell off. Note the mirror image of the interior on the lower surface of the wing. The stabilizer suffered a minor "crinkle" on the leading edge on both sides. THERE'S NO THRILL LIKE FLYING!

Anyone who has ever controlled the live power of an airplane and felt it lift free of the earth has experienced a real thrill! Whether it's a "hot" fighter plane splitting the clouds, a huge transport spanning the oceans or a trim graceful model whizzing through the air, an airplane in flight is a thing of beauty and excitement and genuine entertainment. Controlling it is a thrill that grows greater with increasing experience and skill. Years ago when life moved more slowly, the popular pastime of youngsters and oldsters alike was waiting at the depot to watch the train steam through. In those days, an electric train was the dreamed-of treasure of every youth. Today, the airport has taken the place of the railroad station as the romantic magnet of transportation that attracts and fascinates the youth of America. And today, owning a plane that flies under its own power is the ideal of boys of all ages. Topping, the pioneer in practical prefabricated flying model airplanes, is the first to serve American youth with an airplane that brings all the fun of flying with minimum time spent preparing for flight. Printed on the instruction sheet for the Topping 100. 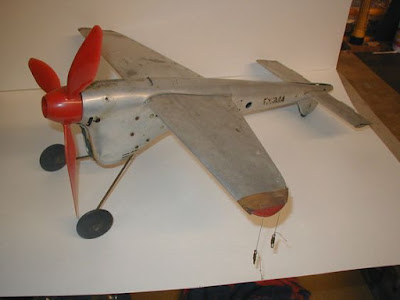 Collect Air is a good source of information and data on these collectible model airplanes. 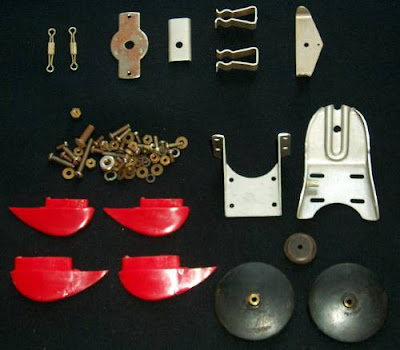 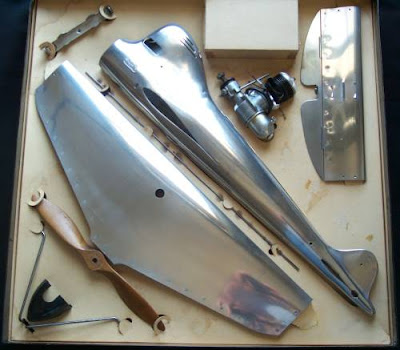 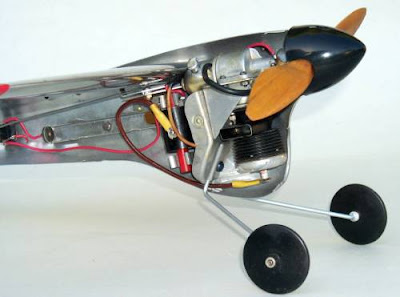 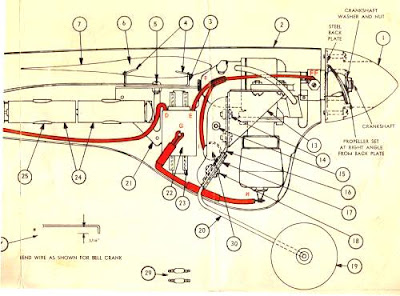