Alcock and Brown Arrive in Newfoudland with their Vicker's Bomber 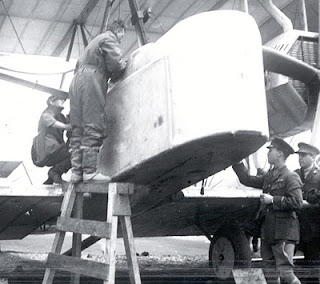 "Sir, I can take you down to Charlie Lester's place and you can arrange to have your supplies moved to Mount Pearl.  Charlie just lives down on Hamilton Avenue; we passed his place on the way to the station.  You could also ask him if he would be interested in leasing his field in case Mount Pearl is unavailable."
"Teddy and I will have to decide by Monday where to transfer our equipment.  Let's go see Charlie"   They all pile into the car and stop at Charlie's house at 34 Hamilton.  When they meet Charlie, he said he could move their equipment to where ever they wanted, since he had already moved Hawker to Mount Pearl and the Raymor team down to Pleasantville.  When asked whether he would be interested in leasing a field, Charlie said, "I'm sure we could make arrangements for a fee that is."  With that they shook hands and dropped the boys off at the station.  Before parting, Jack turned to Ike and asked him if he would have a word with his boss and ask if he could help persuade Kerr to share his airstrip with them.  They have to find a way to get permission to use the Harbour Grace field as it is the only suitable place for a hop-off with a heavily laden bomber.  Ike said he wasn't promising anything but would have a word with his boss first thing in the morning.
"Jack, we can have a word with Freddy Rathenham, and the Sopwith people tonight at the Cochran, and ask if we could use their sites at Pleasantville for our setup.  Then we would be in a position to select the best option and give Charlie Lester a destination for our equipment~~whether we go to Mount Pearl or to Pleasentville." added Teddy.