The Complete History of the USAF Thunderbirds 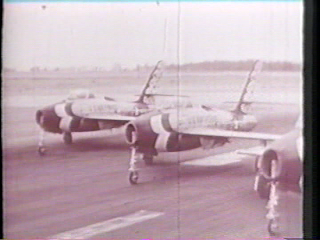 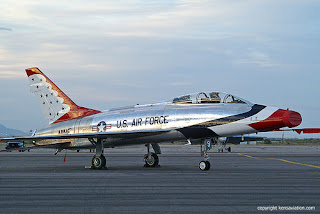 The Thunderbirds were officially activated May 25, 1953, as the 3600th Air Demonstration Team at Luke Air Force Base, Ariz.The unit's first aircraft was the straight-winged F-84G Thunderjet, a combat-proven fighter-bomber that had seen extensive action in the Korean War. Early in 1955, the Thunderbirds transitioned to the swept-wing F-84F Thunderstreak. In their first three years with the F-84, the team performed for more than nine million spectators in 222 shows that included tours of Central and South America.
In June 1956, the team moved to its current home at Nellis Air Force Base, Nev. At the same time, the Thunderbirds traded the veteran F-84 for the world's first supersonic fighter, the F-100 Super Sabre --the aerial platform that would serve the Thunderbirds for 13 years. The F-100 years were memorable. More than 1,100 demonstrations were flown in the "C" and "D" models of the aircraft, thrilling spectators from the Far East to North Africa. In the middle of the F- 100 era, the team changed briefly to the F-1O5B Thunderchief. After only six shows in 1964, due to an extensive modification that became necessary on all Thunderchiefs, the Thunderbirds transitioned to theF-1OOD, a jet that was capable of air refueling, which allowed the squadron to fly greater distances in less time.
See original footage of the Thunderbirds in those early days 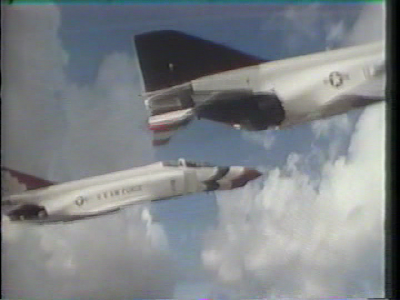 The Thunderbirds flew the Air Force's frontline fighter of the time, theF-4E Phantom II.From 1969 to 1973,  In five seasons, the team performed more than 500 demonstrations while traveling to 30 of the 50 states, Canada, Central America, and Europe.


See original footage of the Thunderbirds flying the Phantom 2 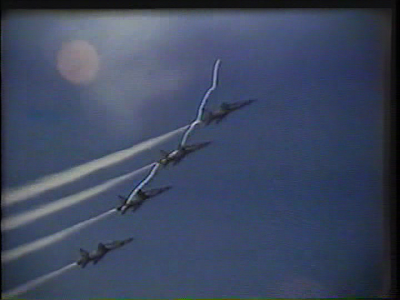 In 1974 in the midst of the first Oil Crises, the Thunderbirds converted to the T-38A Talon, the world's first supersonic trainer aircraft. The T-38 was more fuel efficient and less costly to maintain than the larger F-4. The team flew nearly 600 demonstrations during eight seasons with the Talon.

See original footage of the Thunderbirds flying the Talon 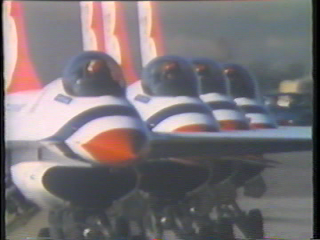 Early in 1983, the Thunderbirds reinstituted their traditional role of demonstrating the AirForce's frontline fighter capabilities. Transitioning to the F-16A Fighting Falcon allowed the team to demonstrate the very latest in fighter technology. In 1987, the Thunderbirds became the first U.S.demonstration squadron to perform in a communist country, as the team visited China. In 1991, the team traveled to Europe for the first time since 1984. During the 30-day tour, 11 air demonstration were performed in eight countries, including first-time visits to Switzerland, Poland, and Hungary.
In 1992, the Thunderbirds transitioned to the F-16C for their aerial demonstrations. The squadron was the last active-duty unit to convert to the upgraded model. The conversion took place simply because the team represents the rest of the Air Force and every front line F-16 squadron employs the F-16C. The switch also made sense for logistical and combat-conversion reasons. In its rookie season, the Thunderbirds took their F-16Cs on a 17-day tour of Latin American countries. All totalled, 75 air demonstrations were performed before an estimated 6.6 million people in 1992.
The 40th anniversary air demonstration season was abruptly cut short after a pilot injury. The commander /leader was unable to fly the final 14 scheduled air demonstrations due to a lower back injury. The lead jet position serves as the platform for all the maneuvers performed during an air demonstration and as leader, his style of everything -- from making the majority of radio calls to his steady inputs of airmanship -- is critical to the success of every performance. The squadron still traveled to those canceled airshow sites and delivered poise, professionalism, and public relations in other forms, to include static displays, media orientation flights, autograph signings, and visits to local schools and hospitals. One of the highlights of the season was the 800th air demonstration flown in the F- 16. More than 8 million people saw the Thunderbirds in 1993.
The 1994 demonstration season proudly ushered in the U.S. Air Force Air Demonstration Squadron's fifth decade. The Thunderbirds flew 67 air demonstrations in front of more than 6 million people, surpassing the 275 million mark for attendance. Traveling to the Far East in August, the squadron's 26-day "Thunder Over the Pacific" tour showed 1.3 million spectators in Alaska, Japan,Korea, Thailand, Singapore, Malaysia, Guam, and Hawaii the capabilities of American air power.


See original footage of the Thunderbirds flying the Fighting Falcon