Electric bikes often look like traditional bicycles, scooters, or even small motorcycles. Herein lies the problem – by simply looking at it, e-bikes are difficult to differentiate from other similar electric devices.
According to the Ontario Ministry of Transportation, e-bikes in Ontario have the following features :
It is also illegal to modify your e-bike to make it faster or more powerful.
Precise Law:
POWER-ASSISTED BICYCLES
Consolidation Period: From December 6, 2018 to the e-Laws currency date.
Last amendment: 487/18.
This is the English version of a bilingual regulation.

4. All electric terminals on a power-assisted bicycle must be completely insulated and covered.  O. Reg. 369/09, s. 4.

5. The brakes of a power-assisted bicycle must be capable of bringing the bicycle, while being operated at a speed of 30 kilometres per hour on a clean, paved and level surface, to a full stop within nine metres from the point at which the brakes were applied.  O. Reg. 369/09, s. 5.

6. A power-assisted bicycle must not be ridden on, driven or operated if it has been modified after its manufacture in any way that may result in increasing its power or its maximum speed beyond the limits set out in clause (d) of the definition of “power-assisted bicycle” in section 2 of the Motor Vehicle Safety Regulations made under the Motor Vehicle Safety Act (Canada).  O. Reg. 369/09, s. 6.

Located this Schwinn Balloon Tire Beach Cruiser bike on Marketplace in excellent condition for 120 dollars that I intend to transform into my cottage bike. Since the cottage is located in a remote hilly region of Eastern Ontario I set out to endow our bike with lots of hill climbing ability. 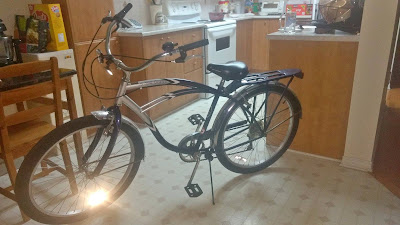 Watch this video clip to follow along as I turn the old Beach Cruiser into a fun Hybrid Bike.

It been a while, working to get the kinks out of the chains and sprockets for this installation but we are beginning to gain some confidence in its reliability.

Instead of getting better the chain problem steadily grew worse until while peddling along the drive train suddenly seized. After considerable effort we were able to free it enough to get the engine started and motored home. At this point we decided that before another ride we needed to get to the bottom of the drive train problem.

Because the chain worked well during the ride home it was ruled out as the cause of seizure problem and began concentrating on the clutch.

The first test was to run the bike by the electric motor with the rear wheel off the ground and the clutch disengaged. The drive train ran smoothly for a while then it slowed and chattered sporadically then suddenly the engine started and began to run although the clutch lever remained in the disengaged position. This had happened a few times before while during e bike riding conditions but while troubling it had not seemed important enough to investigate further. The sudden starting event was replicated several times so a clutch tare down was initiated.

A Google search produced several helpful videos and discussion group topics which proved helpful and progress went quickly until the clutch removal stage was reached. It was clear that the clutch plate was not coming off without the aid of a gear puller. 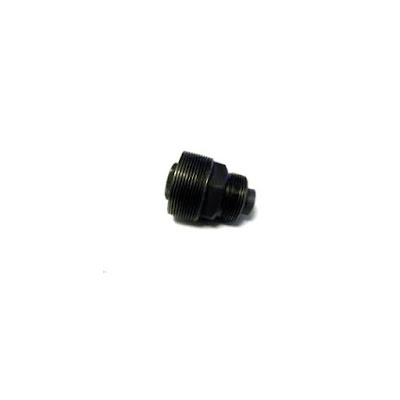 One was ordered from an Ebay seller then another from a local supplier just to beat the lengthy delivery time dilemma. Thinking about the picture of the tool I began to realize that there was one supplied in the Gas Bike Kit stored away in the basement.

Employing the gear puller the clutch plate finally popped off the shaft just before we were running out of threads on the center screw of the puller. It was not without a lot of prying and applying of heat from a blow torch to the big gear retaining ring did the clutch plate separate from its base plate. 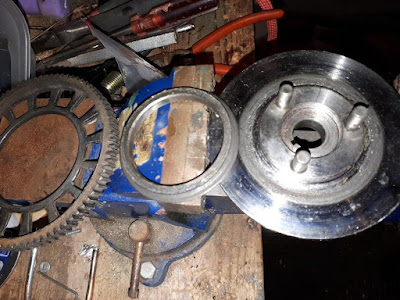 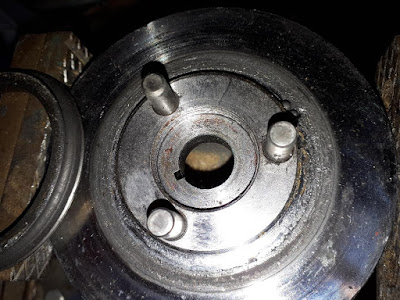 The area under the retaining ring/bearing was found to be badly pitted and galled with smeared metal stuck or welded to its surface. There were no more than a half dozen ball bearings floating around intact, the rest presumably accounted for the smashed metal debris that had caused my clutch to completely seize up.

Upon viewing the sad condition of the clutch plate assembly I immediately placed an order for the complete clutch rebuilding kit from Motorized Bicycle Canada. 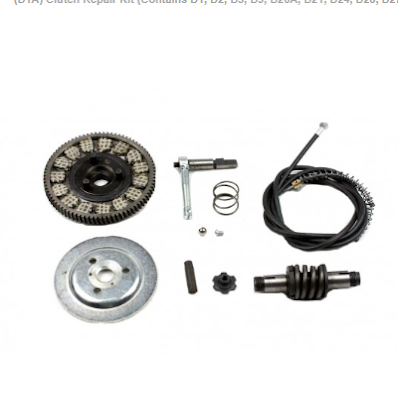 Since the wait was going to be at least a few days and the October weather was pleasant enough for biking we decided to clean up the damaged back plate and smear the bearing surface with a little grease. Taking care to not apply too much for fear contaminating the friction surfaces with lubricant, which certainly would cause a slipping clutch.

Clutch adjustments were performed to optimize the drag under disengaged and slippage under engaged conditions.

A twelve kilometer shakedown ride was promptly completed where the bike preformed flawlessly. The only change noted was the jump starts caused the back tire to slide some on the wet gravel surface, this had never been observed previously.  The only possible cause for this may be previously the engine was leaking compression because of loosely fitting spark plug. 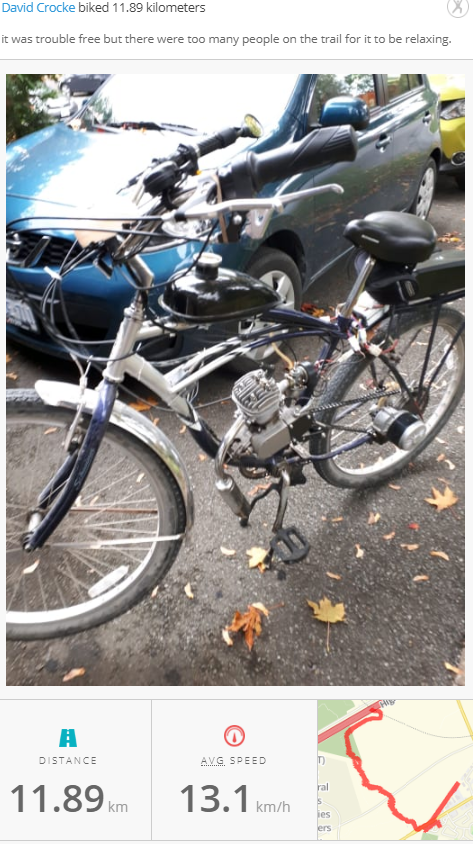