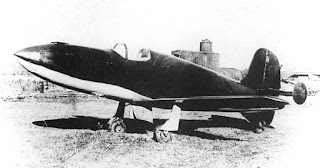 Credit
This post is based upon an Internet page of a collaborative effort by contributors from Eastern Europe.
A symposium was held at the facilities of the most important Russian aircraft constructor, after learning that the great Western Allies were developing new fighter aircraft which did not applied jet propulsion. At this symposium papers were presented on the application of new technologies in aviation engines. More specifically presentations on rocket and jet engines were included, with the aim of encouraging the development of a new vision of interceptors, incorporating jet propulsion.

By 12 July 1940 The defense committee (Committee Oborony) of the Council of People's Commissars of the USSR (Council Folk Komissarov SSSR), adopted a resolution which paved the way to the creation of the first Soviet jet aircraft. The resolution, among other things, called for the solving of the problems associated with the use of jet engines to achieve supersonic speeds and stratospheric flight.  Also, this resolution of 1940 highlighted the need for a fighter-interceptor rocket engine to achieve the fore mentioned goals .

The idea of ​​creating such a fighter dates back. as far as 1938, when the idea was first proposed by SPKorolev while he worked on the RP-218 shuttle.

It was assumed that the rocket motor, with its massive specific fuel consumption (fuel 4-6 kg per second with the development of 1,000 to 1,500 kg of thrust) can be most effectively used in a fighter-interceptor.

The interceptor would have to be some form of glider which is propelled quickly to take off and flown up to the necessary altitude for target interception. Glided to the target and after fuel is fully consumed, it is glided as a sail plane, back to home base. Normally targets had to be discovered visually which required a lot of patrolling about the sky, so that a stay at high altitude was problematic, because any patrolling had to be at the expense of height. It was not able to patrol and and maintain altitude and there was a need for accurate guidance of the interceptor to the target. The drive was supposed to provide the maximum level flight speed of 800-850 km / h. The speed at this time (1940) was phenomenal for hunters with a conventional piston engine, and thus it could secure dominance in air defense.

The main drawback of such aircraft, according Korolev was the short duration of the flight. Military experts have considered these proposals S. Korolev, and expressed reservations about the implementation of such aircraft. In the spring of 1941, the Design Bureau (OKB) headed by chief designer on the project VFBolhovitinova (V.F.Bolhovitinova) has drawn up a project fighter-interceptor rocket engine LSDushkina (L.S.Duškina), which was supposed to have a speed of 800 km / h or more. Based on this development, on its own initiative, began the development of the project A.Ya.Bereznyak (A.Â.Bereznâk) i AM Isaev (A.M.Isaev). The concept of the aircraft entirely relying on an idea proposed by SP Korolev, once in 1938. 9 June 1941 the chief designer VFBolhovitinov hit the aviation industry People's Commissariat (NKAP) a formal request for approval of a fighter-interceptor missile under ozunakom BI (BI).

The proposal was accepted in its entirety, with the NKAP issued a new deadline for the project documentation of all 35 days, instead of three months as it was in the proposed study. Flights A.Ya.Bereznyaka and AMIsaeva originally designed with a rocket engine thrust from 1,400 Kg / s. The level of technology incorporated in the BI was considerable but implementation of a system for inserting the pressurized fuel in to the combustion chamber presented serious problems. Fuel system installation caused the delay in the implementation of the project. Instead of using a turbo-compressor, it was decided that the fuel in the tank is kept at a pressure of 145-148 ATM. The tank was supposed to provide 115 liters of liquefied compressed gas. This variant of the D-1A engine has become the main direction of development, and the project is verified with "BI". As for the air-frame, it was self-supporting, with flat trapezoidal low-mounted wings. The plane was a wooden structure. The request for high-speed fighter-interceptor came with opposing requirements:  a high speed for enemy interception and for low minimum landing speeds as well as good glide performance. The latter two issues are addressed by the creation of special designed and engineered flaps as well as other aerodynamic design features.

Part of the problem is solved once the first prototype began its flight test program lead by the expert aerodynamicist JF Florov (I. F. Florova). 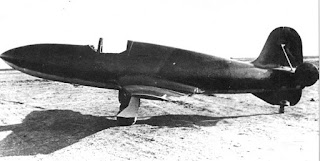 Fuselage "BI" - the wooden semi-monocoque construction. The cockpit has been shielded from the front panel, and by placing special armored plate on the sides and behind the seats. These are 5.5 mm thick steel plates that were supposed to protect pilots from machine-gun fire. In the front part of the fuselage are the built-in weapons, which consists of two 20 mm  caliber SHVAKE automatic cannons with 45 rounds each. Within the lower forward fuselage are placed two bottles of air and two containers of nitric acid. Behind the pilot seat there were other bottles of fuel and oxidizer. Raktni D-1A-1100 installed in the rear fuselage. Fuel - aviation kerosene, and as the oxidizing agent, 96-98% concentrated nitric acid, which is inserted into the motor under pressure from the air cylinders (for each kg of kerosene there was 4.2 kg oxidizer). The Motor consumed 6 kg of kerosene and oxidizer per second. The total amount of fuel in the plane, was 705 kg, which gave a duration at constant engine operation of about 2 minutes. Estimated all up aircraft weight of the "BI" is 1,650 kg, and a dry weight of around 805 kg. It is interesting that because of "short" development period allowed (35 days), the aircraft maker produced almost no detailed technical drawings, an unfortunate situation directly caused by the rushed development period. The aircraft was made by hand without much in the way lofted drawings at the site where the individual parts where made. This lack of a technical record of the procedures involved proved to be a grave mistake in the end.

September 15 1941: First prototype "BI" was completed, however, the engine was still not ready. At the request of the Deputy Commissioner NKAP Yakovleva (A.S.Âkovleva) the prototype plane was sent for testing in the wind tunnel at TsAGI Institute (CAGI). Success in wind tunnel tests made it possible to continue with the testing without an engine. Using the unit's Pe-2 bombers to carry the engine-less prototype aloft, the test pilot (B.N.Kudrin) was able to performed 15 test flights consisting of power-less flight and landings. The focus of these tests was on the flight characteristic for landing without power and to record and compare parametric responses of the craft with the requirements set out in the basic specifications. At the successful completion of initial test phase the designer waited for a suitable motor to proceed.

In October 1941 rapid advances of German OMJ necessitated a requirement to establish a new safe location for the project. This move also extended the deadline for the elimination of problems associated with the engine. By the spring of 1942 the main difficulties were overcome, and the motor was installed into the air-frame. For the first years of the hunter "BI" (sometimes called the "BI-1") is determined by the term of the State Commission, chaired by a VS Pyshne (V. S. lush).

Pilot selected; The main test pilot to be NII VVS G. Ya.Bahchivandzhi (G.Â.Bahčivandži).
First flight: The "BI" made its first flight on May 15, 1942; its Summer weight is limited to 1.300 kg, a motor is tuned to produce a thrust of 800 kg; the flight lasted 3 min 9 s; recorded a maximum altitude of 840 meters and a maximum speed of 400 km / h; the rate of climb was 23 m / s; test pilot reported that the plane's flight characteristics were comparable with conventional types of aircraft and its feel was extremely comfortable.

According to the State Commission, the first "BI" flight marked a new era in combat aircraft operation, and opened a new direction in the development of aviation. This flight was also the first in the world of a fully operational hunter-interceptor rocket-propelled combat aircraft.

Elsewhere In the world by May 1942, there were other experimental aircraft flying with a rocket engine, but these were without weapon systems (Heinkel 176 and the DFS 194 prototype for future Messerschmitt 163V, Gloster G.40).

The use of nitric acid was influenced by the wear parts of the hull. Takoje's first prototype was very quickly scrapped, but the tests are set to be assigned to prototypes 2 and 3. The main difference of the later from the first one was in the installation of landing "skis", instead of conventional landing gear.

At the same time, it was decided to begin with the airplane's production series "BI" for military trials. The trials to experiment with:  the use of various firearms with two automatic cannon under the fuselage; the ability to carry bomb and missile weapons; with cluster bombs (10 pieces weight of 2.5 kg per bomb).

This cluster bomb was supposed to be used against formations of enemy bombers. The BI-VS flew over and above the the bomber formations, dumping the cluster bombs, which would be activated as they passed through the middle of the formation. The idea was for the bombers to be destroyed by flying into the dispersed bomb-lets. 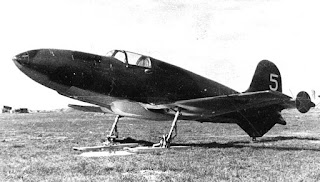 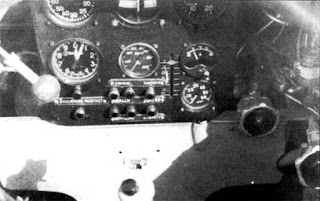 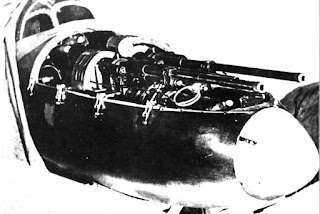 Watch it fly in simulated flight against the Arado jet bombers.

You may also like:Secret Nazi Aircraft 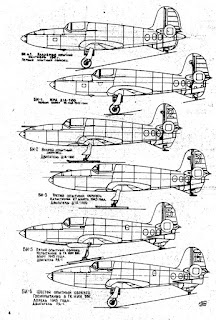 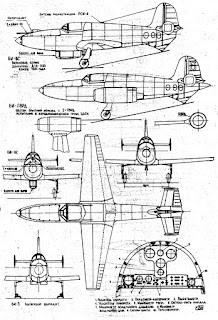 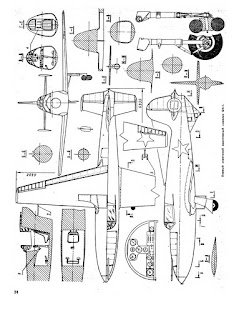