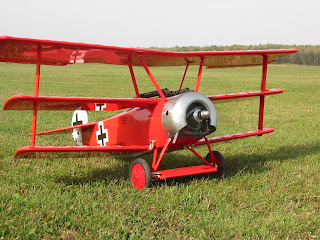 The DR-1 was scratch built in the mid 1960's from Aero-Modeler  plans designed for free flight by the famous British Aero Modeler *P.E. Norman;  it was controlled by using a unique pendulum arrangement to stabilize the model in the pitch mode. The design featured a flyaway wing components to limit damage in a rough landing; of which I am sure there were many. This particular model retained many of these damage tolerant features as well as adding 3 channel radio control. The model was flown successfully using an Enya 19 RC engine in it.'s early days. After all these years of storage in my hanger, the model has been updated by adding ailerons using 90 g micro servos mounted in each wing, installing a micro radio and adding an OS 30 Wankle engine up front for power. It was briefly flown in this configuration but was found to be dangerously tail heavy and in desperate of nose weight added. 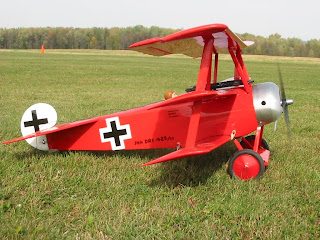 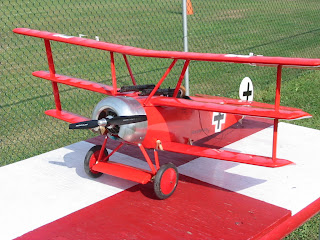 
*The Late Percival Edward "PE" Norman. P.E. as he was called:
His love of scale biplanes was started by his older brothers, both World War I Royal Flying Corps (RFC) pilots. Many of his free-flight scale designs were published in the UK. Among those are the Sopwith Triplane, Gloster Gamecock, the Sopwith Siskin, Hawker Typhoon, Percival Mew Gull, and others. His scale models featured pendulum control in which he was quite expert. All feature extreme knock-apart construction, essential if they were to survive the initial trim flights! Stories abound of PE at Epsom Downs, generally shirtless, with models performing wild aerobatics as he trimmed and tamed them. He took great joy in having several of his scale free-flight models all in the air at once!
Posted by davideo4301 at 9:01 AM