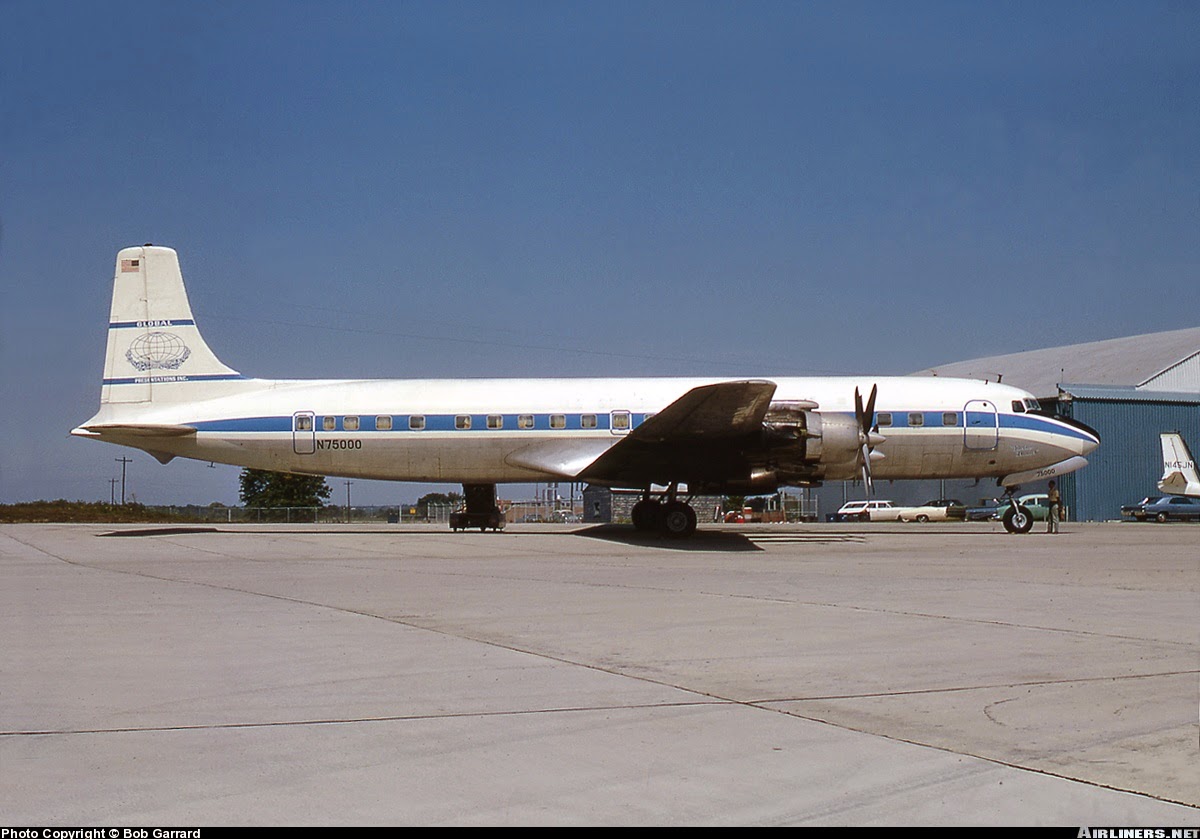 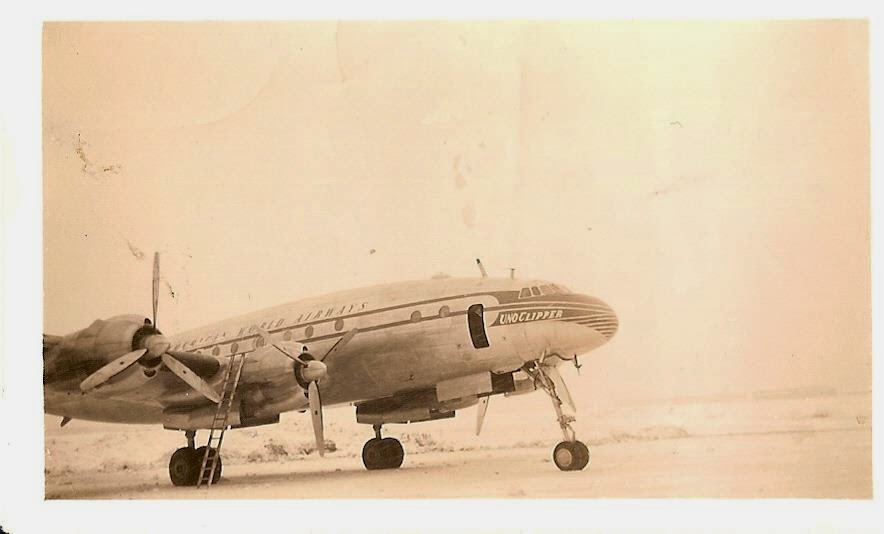 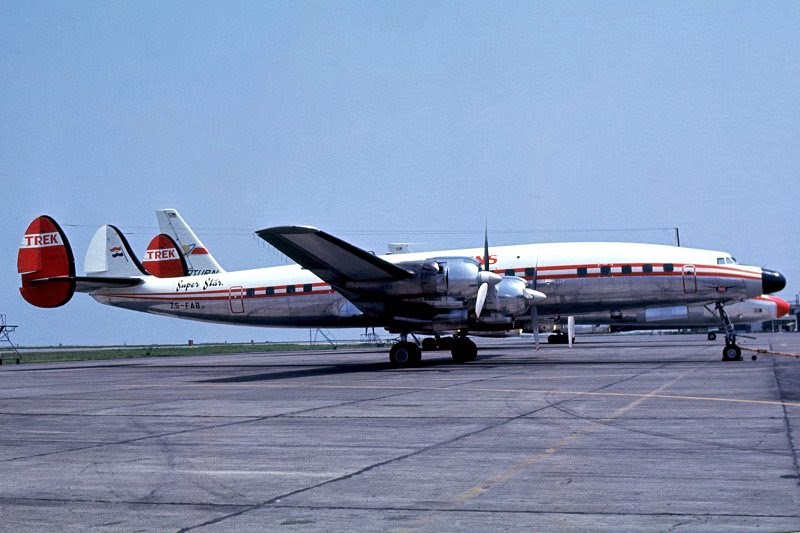 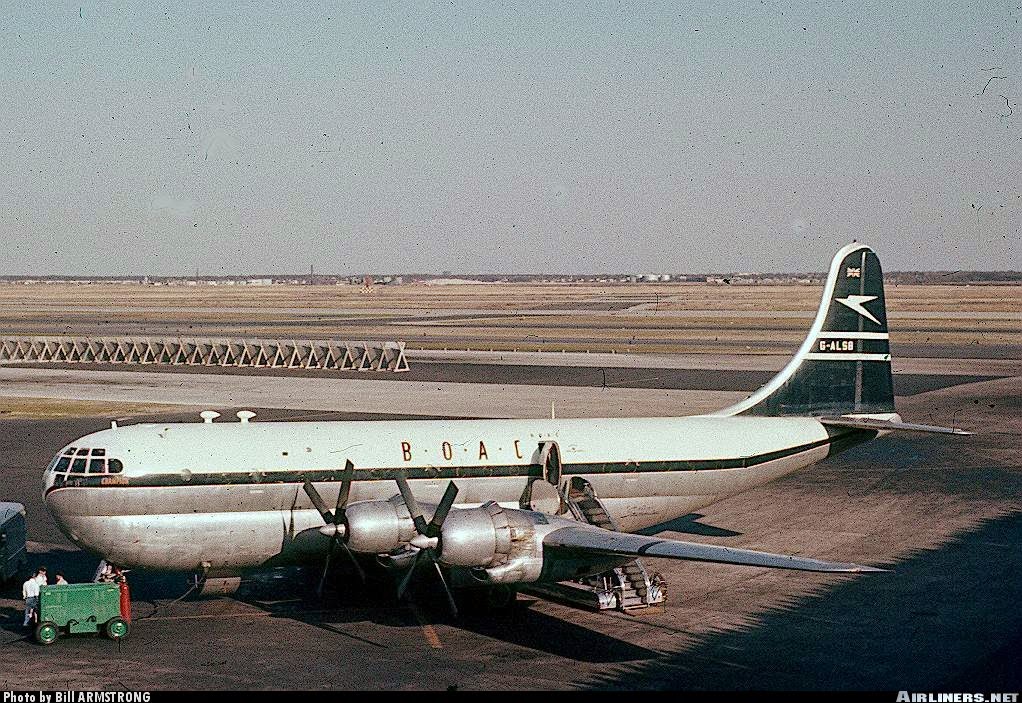 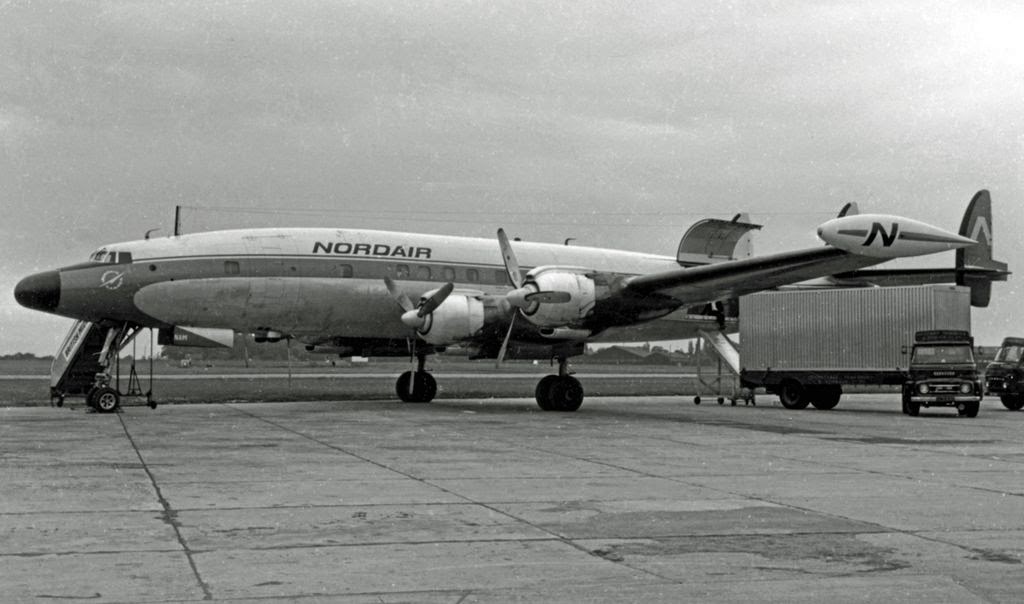 L 1649 H
During the summer of 1957 I was employed as a summer student refueling at Gander Airport. I had just finished my second year at Memorial University and was lucky enough to find a well-paying summer job with the Imperial oil company.

As I recalled after talking with others on our crew who had worked the previous year, the consensus was that the number of landings was down from previous years. However there were more than enough aircraft landing that year to insure that our team would have to work at near full capacity.

We were given a minimal amount of instructions for the job and because we were summer students we only worked the 4 PM to 12 and the Midnight to 8 AM shifts. We alternated between the afternoon shift and the midnight shift. The afternoon shift was not busy because, there were not many aircraft arriving during these hours so our shift mainly consisted of servicing the fuel browsers: checking the truck’s tank for water and working from checklists to see that all the systems including the starting of the engines oil and other fuel systems were properly filled. We operated out of a small crew room located in one of the hangers. This crew room was equipped with a radio receiver tuned to the air traffic control frequency and we were able to monitor the progress of incoming aircraft. This was necessary so that we could be at our stations when the aircraft arrived for servicing.

There were two companies refueling as I recall, Shell and Imperial so only part of the arrivals had fuel contracts with us; we shared the work with our competitors. The aircraft seemed to come in bunches and the frequency of arrivals peaked in the wee small hours of the morning. It was either a feast or a famine operation and since the work was so stressful we all prayed for a famine shift which was always much more fun because it gave us a chance to enter the passenger terminal and do some celebrity hunting which was often a success. This was a little game we all played amongst ourselves - who can spot the famous passenger.

I recall sitting in the crew one morning during a quiet period, listening on the radio to the progress of a straggler flight whose arrival would be delayed due to loss of one of its four engines. These delayed aircraft were quite common during those times, because the engines were not nearly as reliable as they are today. Especially the engines of the Super G’s were less reliable than most: the 3,400 horse power, R-3350-988TC18EA-2 Turbo Cyclone engines were notoriously unreliable. With one engine out, the remaining engine on the side with the failed engine had to work much harder consequently it often would fail as well as it did in this case. The aircraft had to continue flying with two engines failed on one side. This situation usually caused an air of suspense in in the crew room, at least among us rookies; the others had had witnessed this situation too many times to get excited. As we monitored this aircraft's progress and we planned to run outside to watch the landing once it finally arrived. We were always amazed that the double engine out landings look as routine as a normal landing, except for the fire trucks standing by. My guess is that the flight crews were so used to this condition that a double engine out landing was more or less routine to them. In fact I later read that some of the pilots who flew them referred to the Super G as, "the world's largest Tri-Motor" because it was so often flown on three engines.

The refueling operation was called, over wing refueling as opposed to modern day refueling which is done below the wing from fuel hydrants that are installed under the tarmac. In 1957 of course we used Bowser Trucks which had to be grounded to a grounding point located near the aircraft’s nose wheel. This was an important step in order to preclude an electrical discharge which could cause a fire condition.

The older permanent employees manned the trucks, received the fuel load from the flight engineer and kept the billing paperwork. Since we were assumed to be more-fit and less well-trained, we were expected to do the bull work. Namely our task was to pullout 75 feet or so of fuel hose from the truck by making a loop under the mounting ladder which was usually erected by the truck driver between the inboard and outboard engines. Next our job was to scramble up that ladder to the wing’s upper surface with the heavy brass fuel nozzle tucked under one arm along with the five sided plastic fuel dipstick and safety flashlight, which we usually carry in our mouth, locked between the teeth and yes there was the cruciform screwdriver with its welded rod to prevent it from tumbling into a gas tank.  The screwdriver was required for opening the access covers and it was carried in a pocket of our natty white E.S.S.O. coveralls.

Once we had struggled to the top rung of the ladder we stepped onto the wing’s upper surface, which in most cases, on those cold mornings was coated with a thin sheet of glare ice.  And if the wing was not iced over, between the engines the surface was well oiled due to the leakage of oil from the engines.

Since the wing was tapered in thickness; the outboard tanks were shallower than those inboard. This required the dipsticks to have a separate graduations, one for each tank. There were as many as nine or 10 tanks on each wing, four or five per side and in the case of the Lockheed 1649 there was also tip tanks to be filled.

The fuel load  for each tank was conveyed by the truck driver to those of us up on the wing verbally. This information was not that easily understood because of the roar of engines from other nearby aircraft. So that there was a lot of guessing going on about the real fuel load. There were four or five separate quantities of fuel to remember. Those quantities referred to the outermost tank and worked inboard towards the center tank.

Since the fuel load of these aircraft was measured in the thousands of gallons the pumping operation usually required up to a half an hour per aircraft. I cannot remember exactly but we used some rough measure to keep track of the amount that was pumped into each tank, we counted off the pumping time in seconds and converted that by the flow rate into gallons, stopping periodically to check on the tanks actual contents. This check was done using the dipstick and the tanks contents was read from the appropriate scale.

We were very cautious not to overfill any of the tanks because, if the fuel load was not within specified limits the excess fuel would have to be pumped out. This would take a prohibitive amount of time and there was always the threat of dismissal if we were ever to let this happen. The flight engineer was the one who decided if the fuel load was within his acceptable limits, so we were always very nervous about overfilling any of the tanks.

We were able to become fairly comfortable about filling most of the aircraft but the one we least like to service was the Lockheed L 1649 super G, with its thin high aspect ratio wing (150 feet span). This aircraft type required very careful negotiating the over wing walkway because at this point we were standing 20 or so, feet above the tarmac, upon a wing that measured no more than 3 feet across at the extreme out board end.

The pumping rate of our equipment was approximately 100 gallons per minute and at those rates we had to just about sit on the nozzle to keep it from flying out of the tank. The nozzle itself had to be grounded to the wing to guard against static electrical discharge which was essential because of the extreme volatility of avgas. I think there were two or three grades of avgas used in those days: 80/87, 100/130 and 115/145 octane.

While operating on the slippery wing surfaces I had a few incidents, once where I slipped and fell. On this occasion I almost slipped over the wing trailing edge, which was a particularly scary event. Only by hanging onto the fuel hose was I able to avoid falling to the tarmac.

On another occasion I seem to remember slipping and falling and landing on top of the fuel nozzle. When I recovered my footing I was horrified to discover that the open end of the nozzle had made a 2 inch happy face crack in the wing’s upper surface. I reported the crack to the flight engineer who did not seem overly concerned but the flight was delayed by more than an hour in its departure, until a temporary repair could be applied. I never got the chance to examine the repair but I seem to recall that it was not all that sophisticated.  It was good enough however to allow the flight to continue, probably no more than a couple of strips of duct tape was used to cover the crack.

The job itself was for me a high stress one and I looked forward to my days off. During my off time I liked to roam freely about the airport snapping pictures of the strange visitors like the day I spied the first jet transport that I had ever clapped eyes on, a French Caravelle. 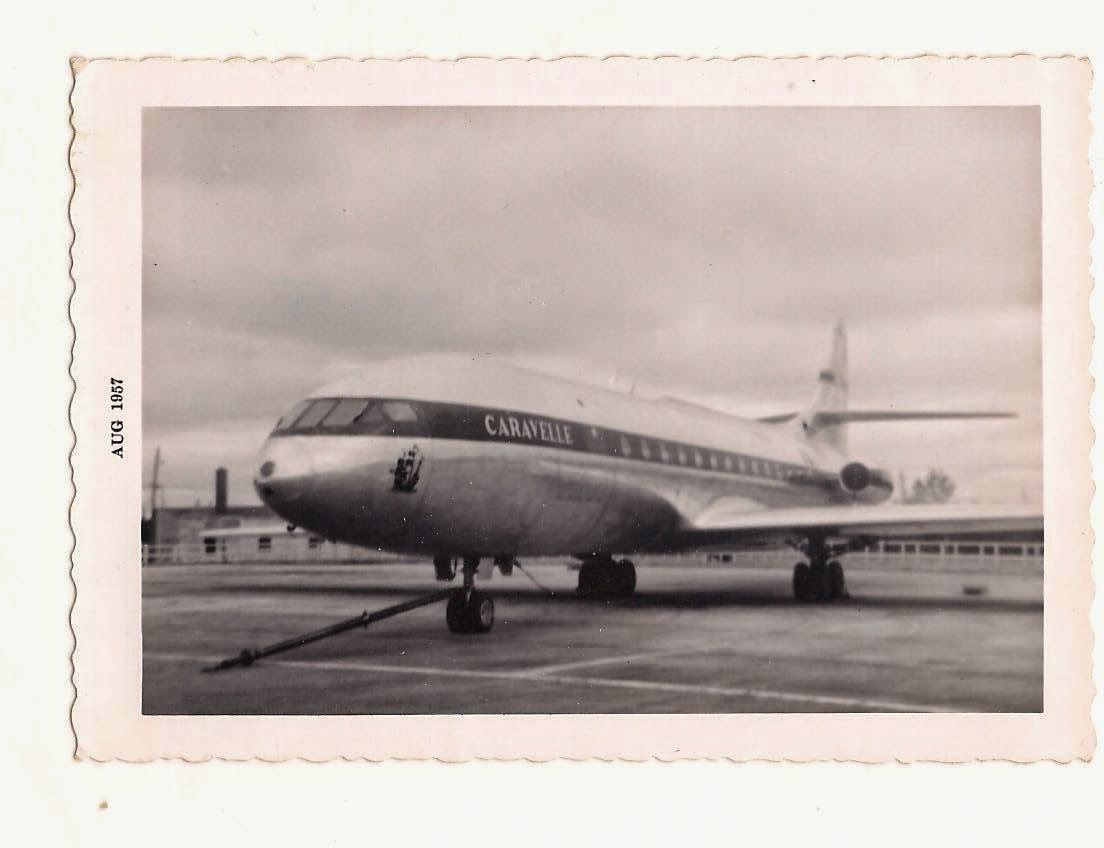 One day I had the joy of viewing a Lancastrian but unfortunately I didn't have my hawk-eye with me on that occasion. For those who doubt there was ever such an aircraft I found a picture of one on the internet.