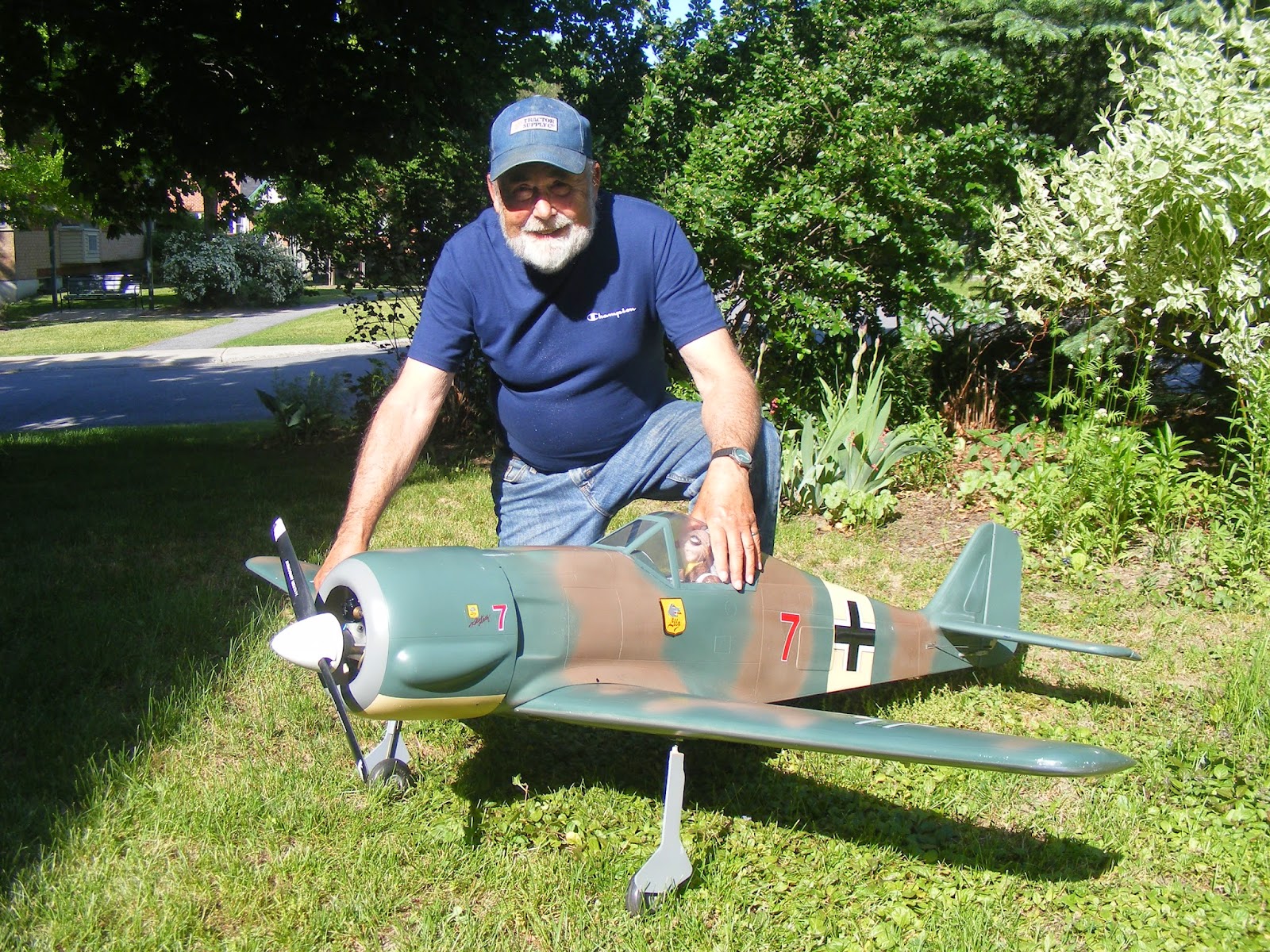 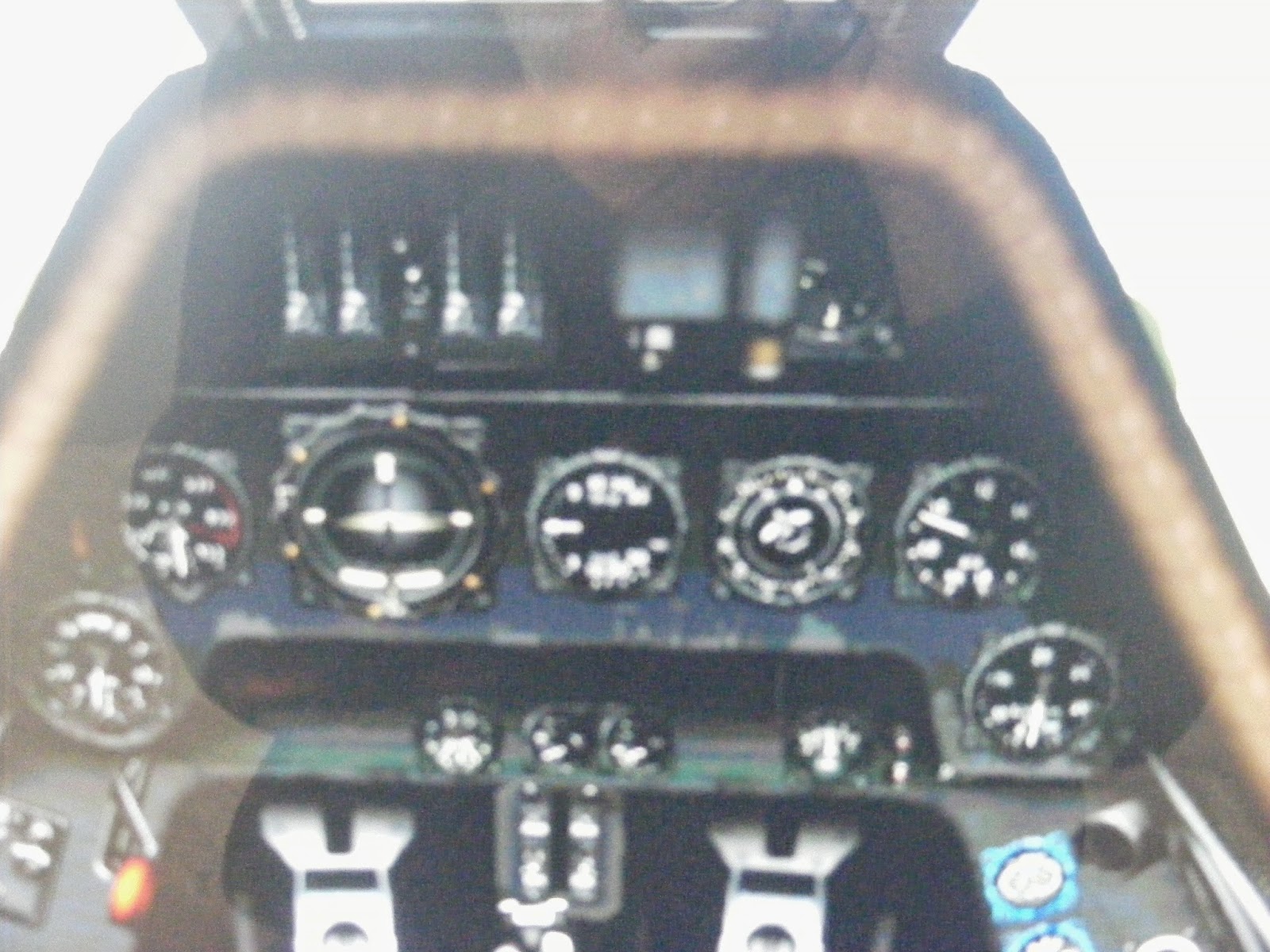 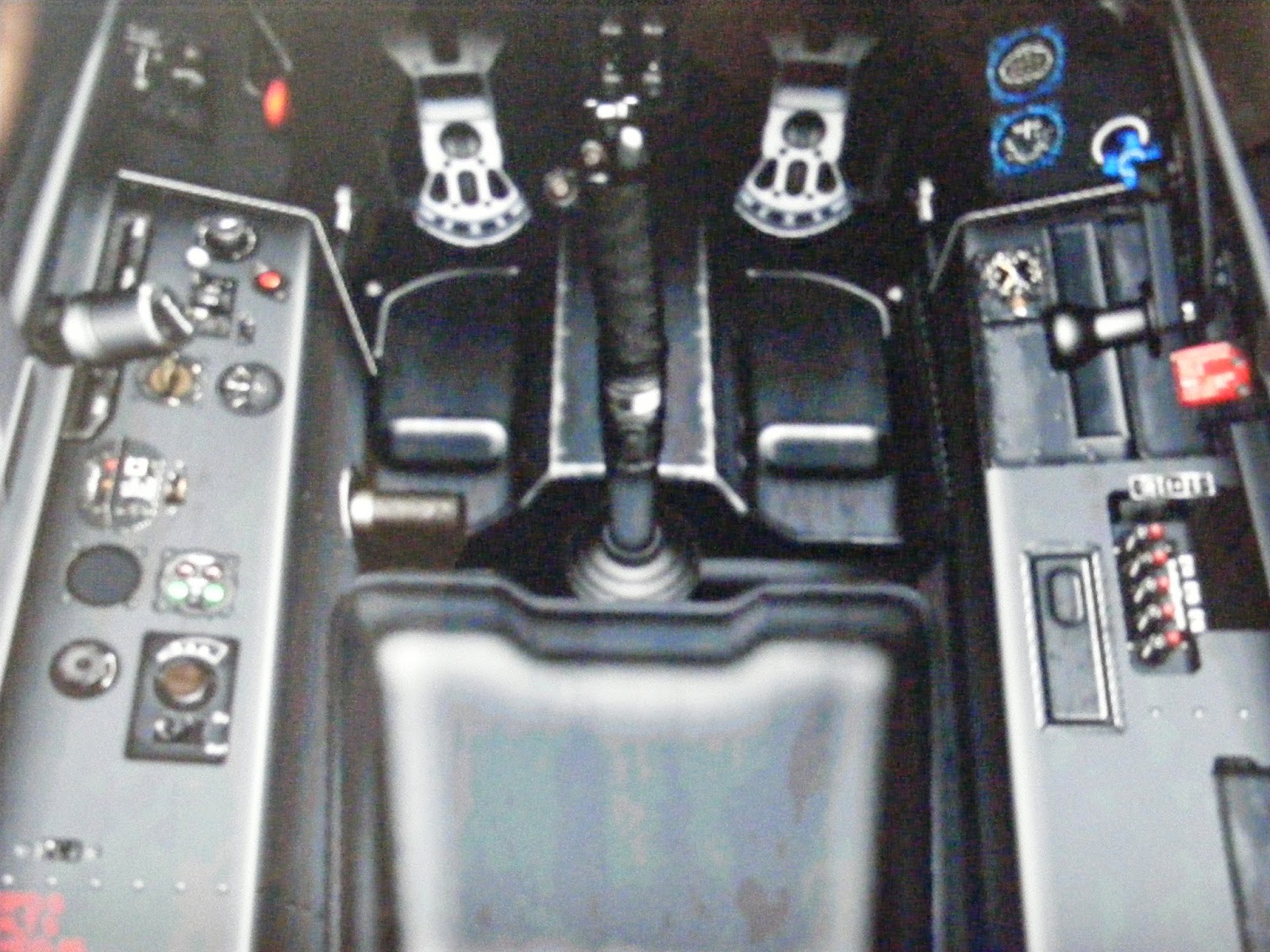 The Cockpit details of the model generated from flight simulator screen images: 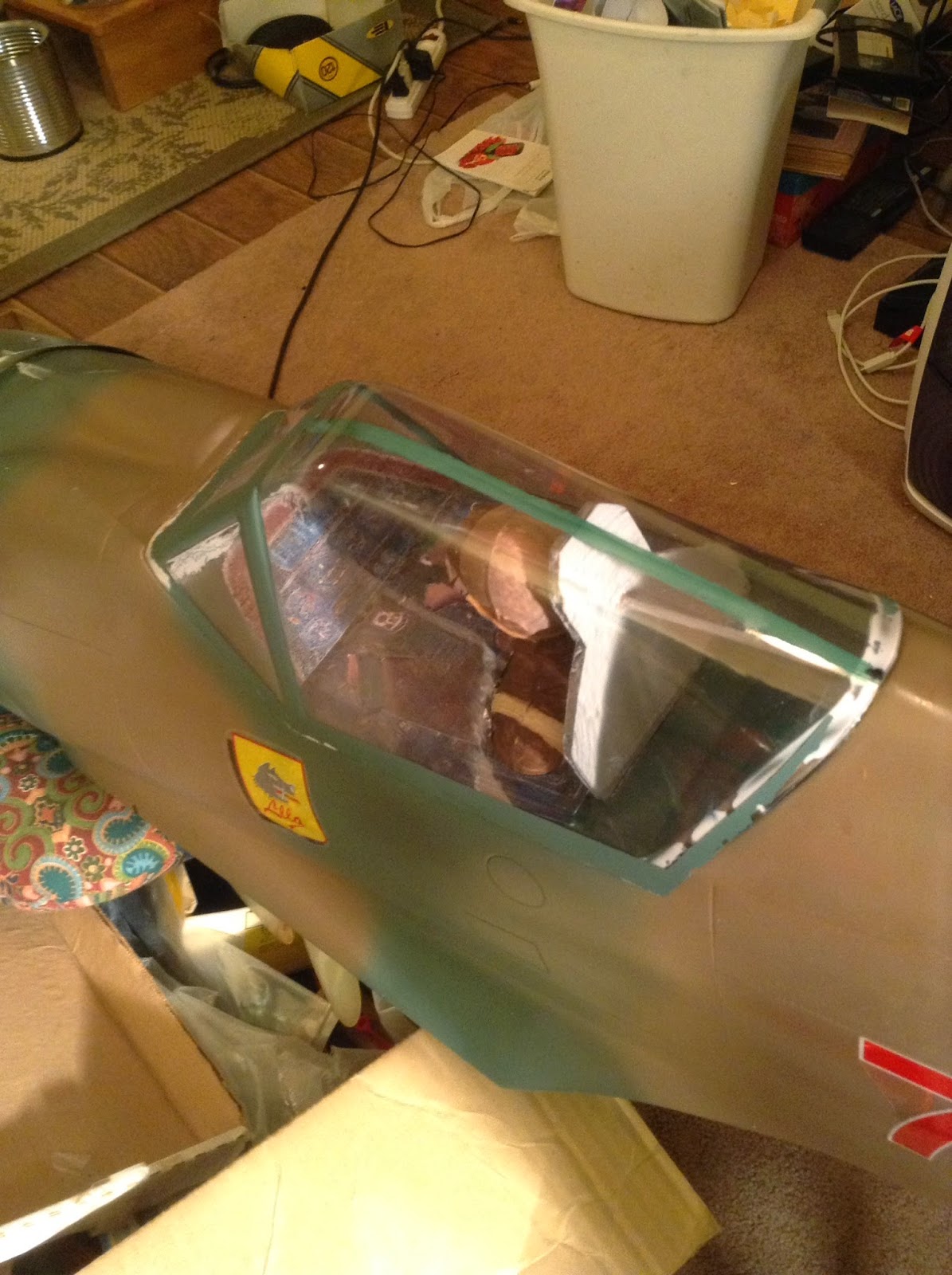 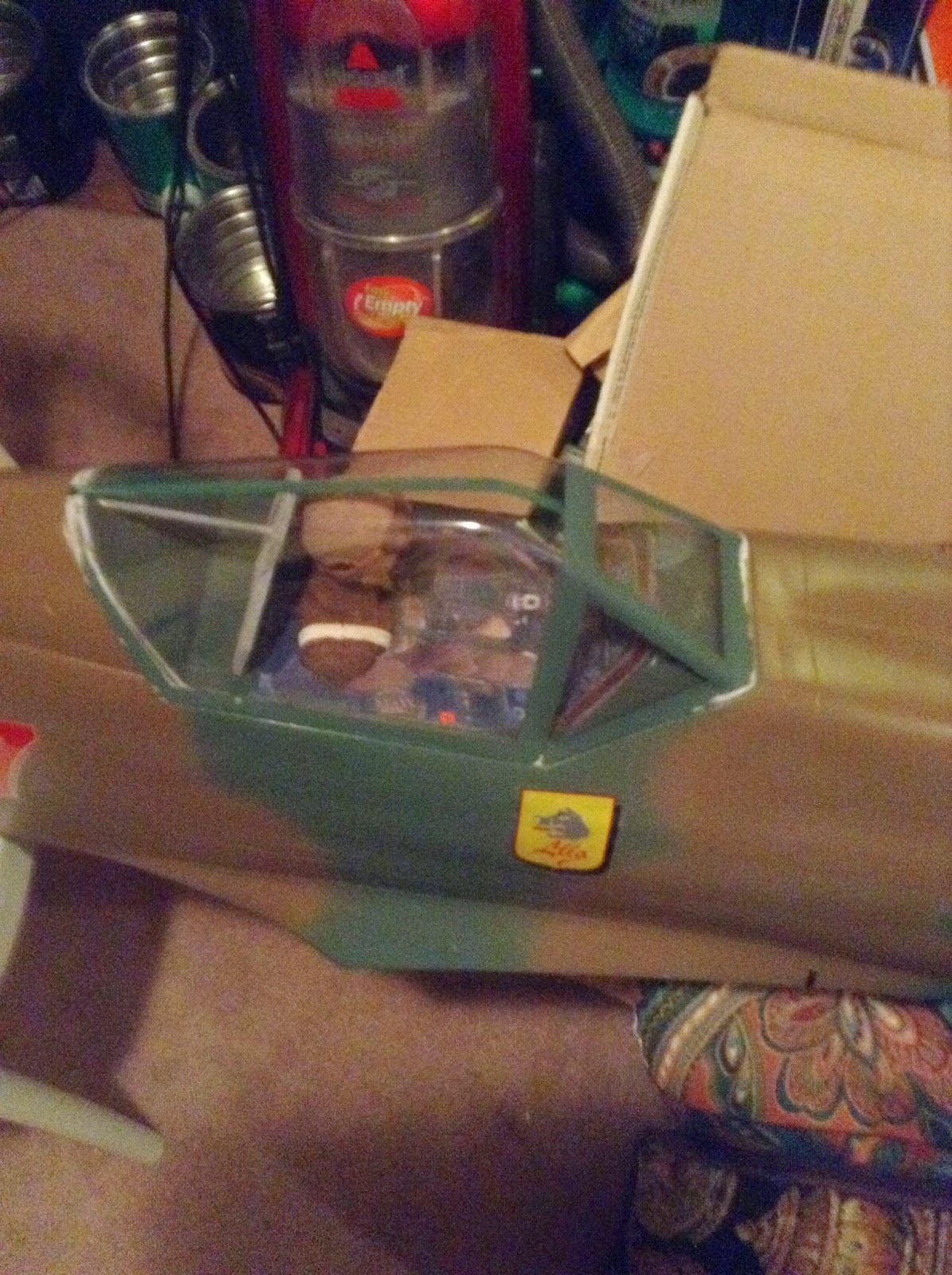 Irvine 120 2 stroke installed with the radial mount which was supplied by the manufacturer with the engine and attached to the plywood and oak sandwich spacer by 3 number 10 rubber well nuts providing a measure of vibration isolation. 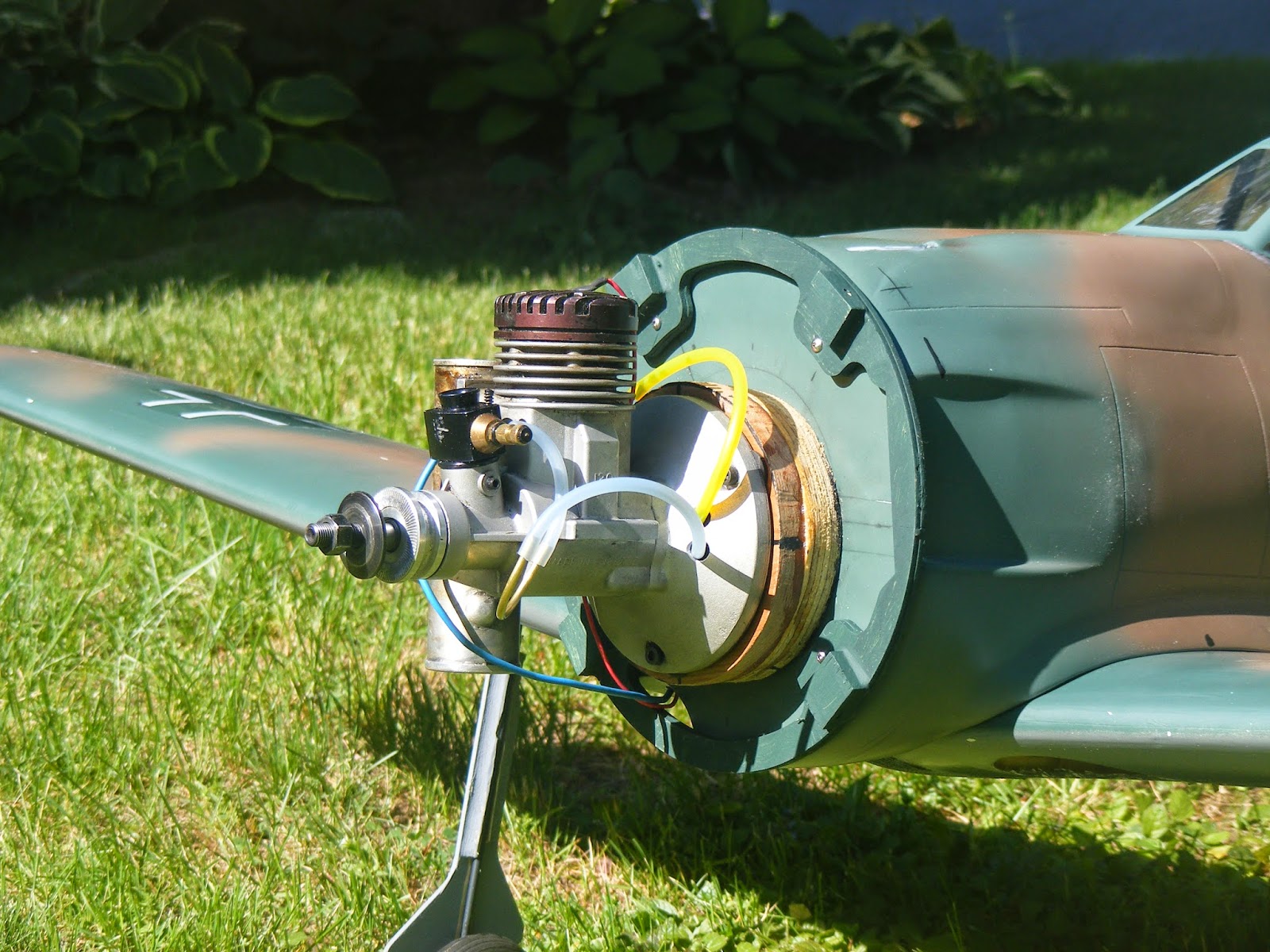 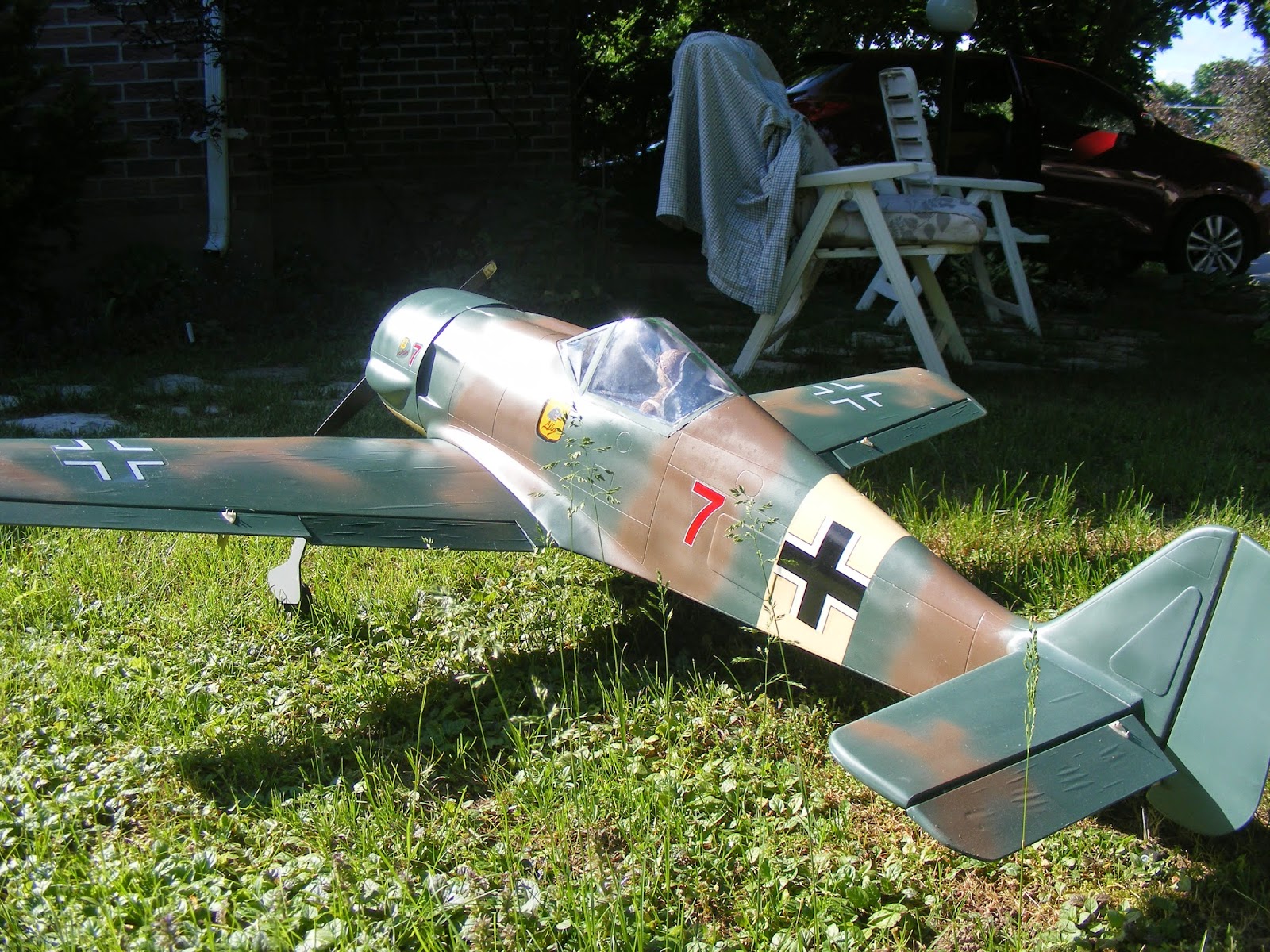 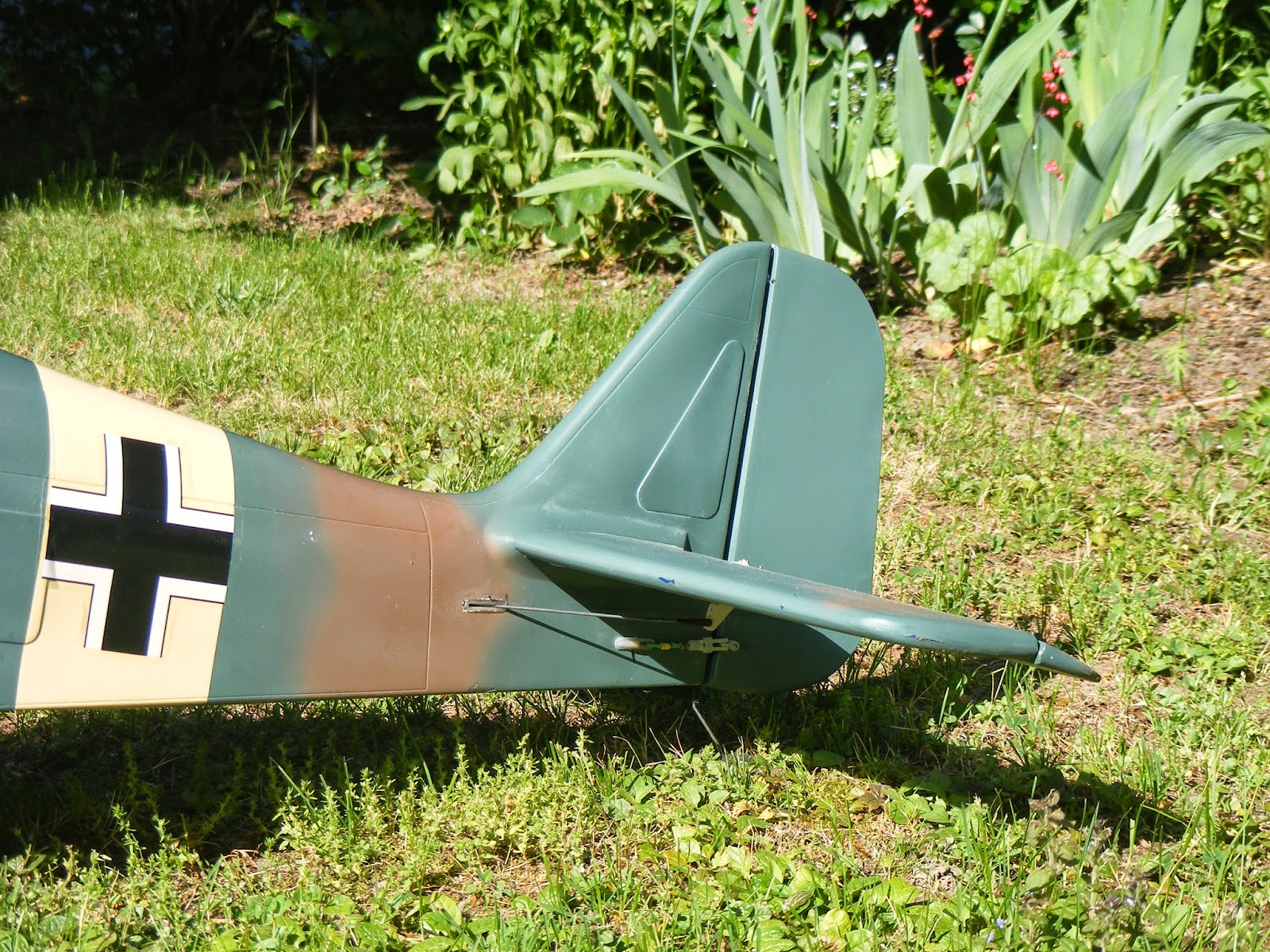 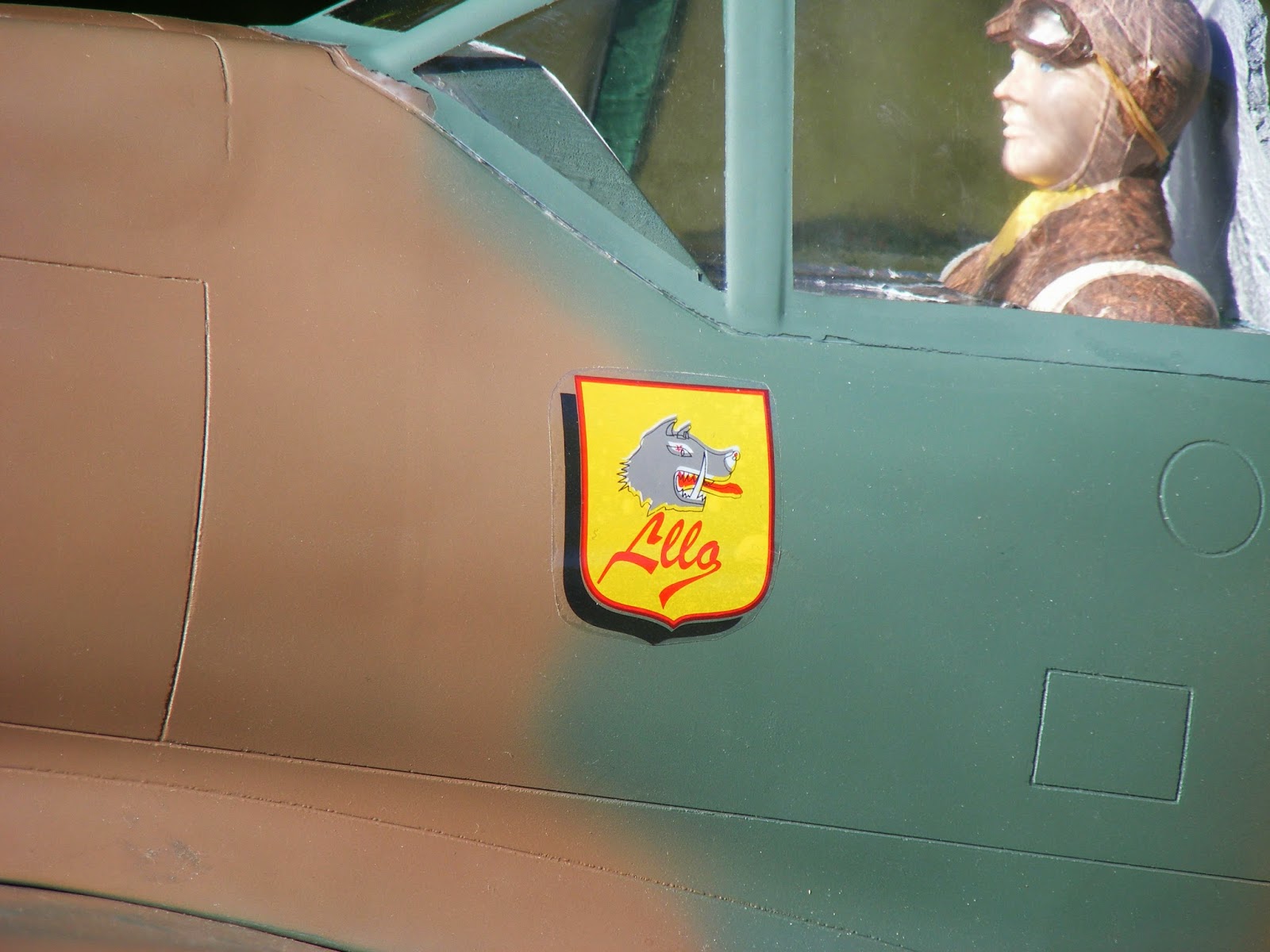 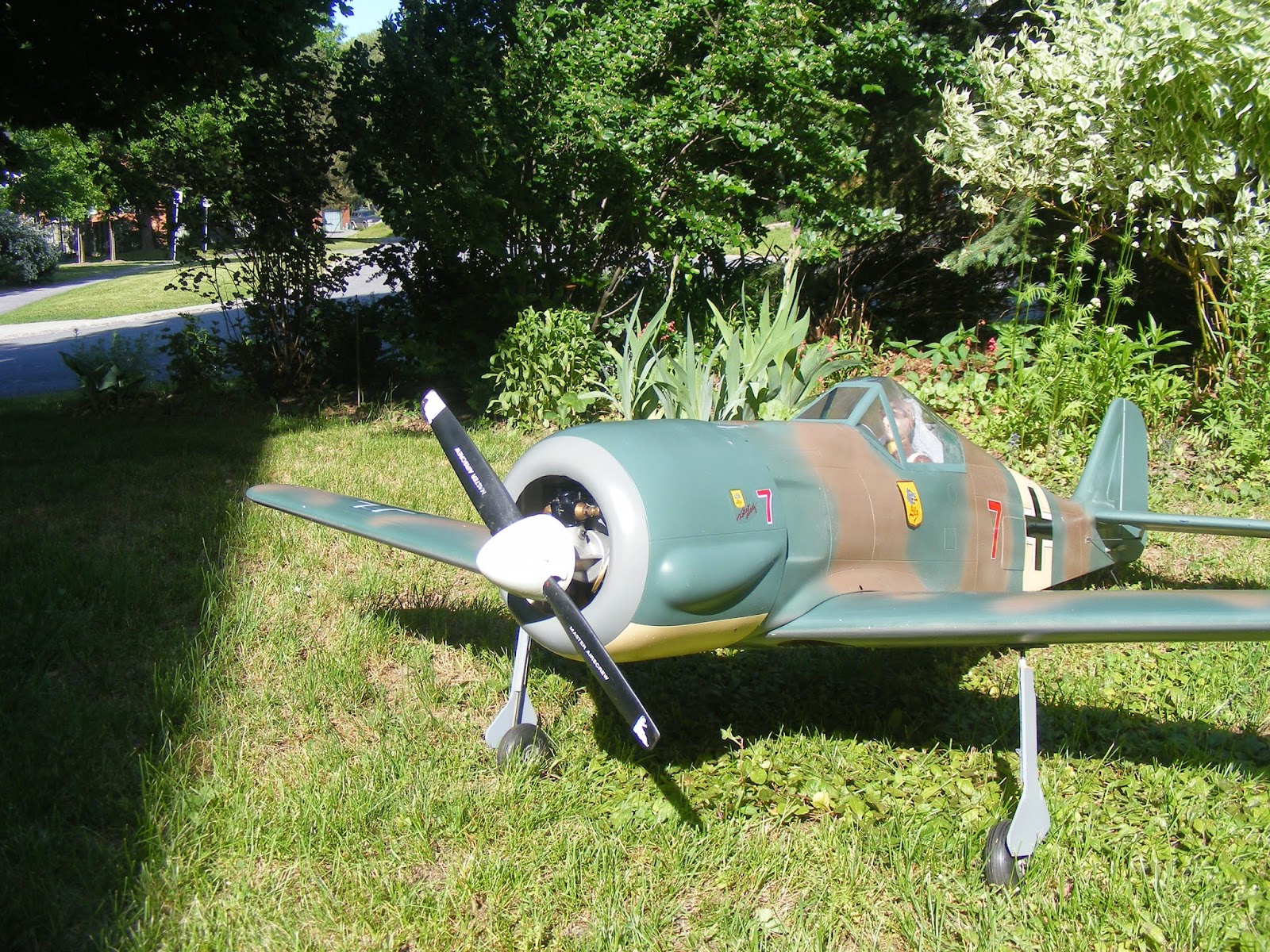 With the batteries still to be installed the model balances about an inch behind the recommended center of gravity location which is indicated by the line made with a black felt marking pen. At this point I am estimating that a pound or so nose weight will be required before I will attempt to fly it.
Since writing these words I this model has successfully completed its maiden flight. I took the model to the flying field yesterday together with its forty five year stable mate; another FW 190 A which incidentally is a very good flyer with many flights logged over the years. The plan was to have three or four flights on the trusted 190 then switch out the flight battery and satellite receiver and install them in the new model, then do some serious shake-down testing. It all went so well when she became airborne on a high speed taxi run and rather than abort at 10 feet altitude
we decided to do a few circuits of the field and land. The landing was controlled into a 12 kilometer headwind with 15 degrees of flaps, so the touchdown speed was quite low with a gentle sink rate. To my surprise the port landing gear unit separated the wing cleanly and the plane slid to a stop on one wheel. I was prepared for the eventuality that reinforcing would have to be made.  I have already filled the area with gap filling foam to help stabilize the built-up structural members; its a trick that I often perform for high stress areas and the results have usually been quite positive. 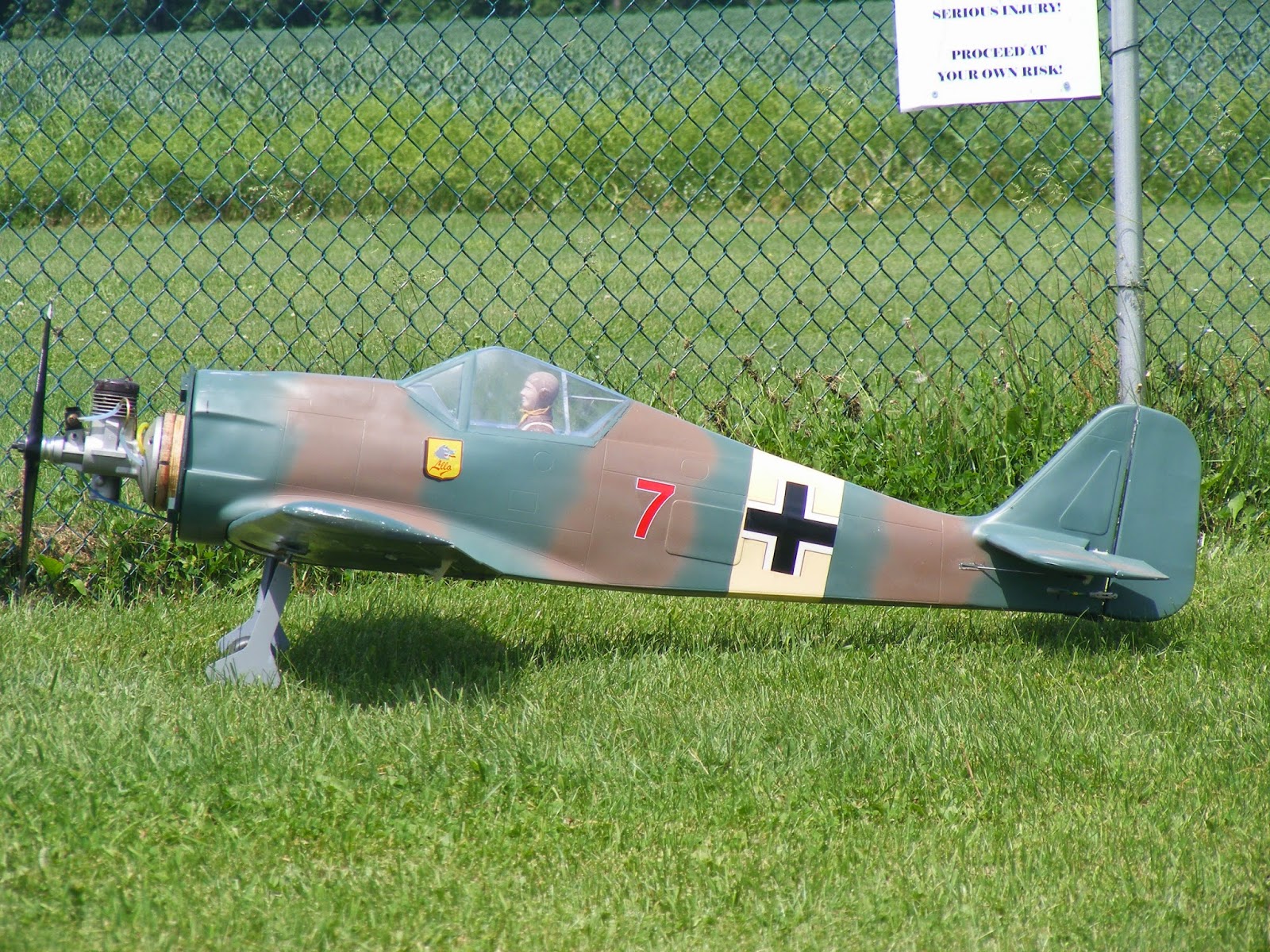 During what was to be a high speed taxi test the plane became suddenly airborne and the decision was made to do a circuit and land rather than to abort from 10 feet altitude.

The gap filling foam can be seen in the picture below as well as the pathetic glue area for securing the gear retract mounting beams. 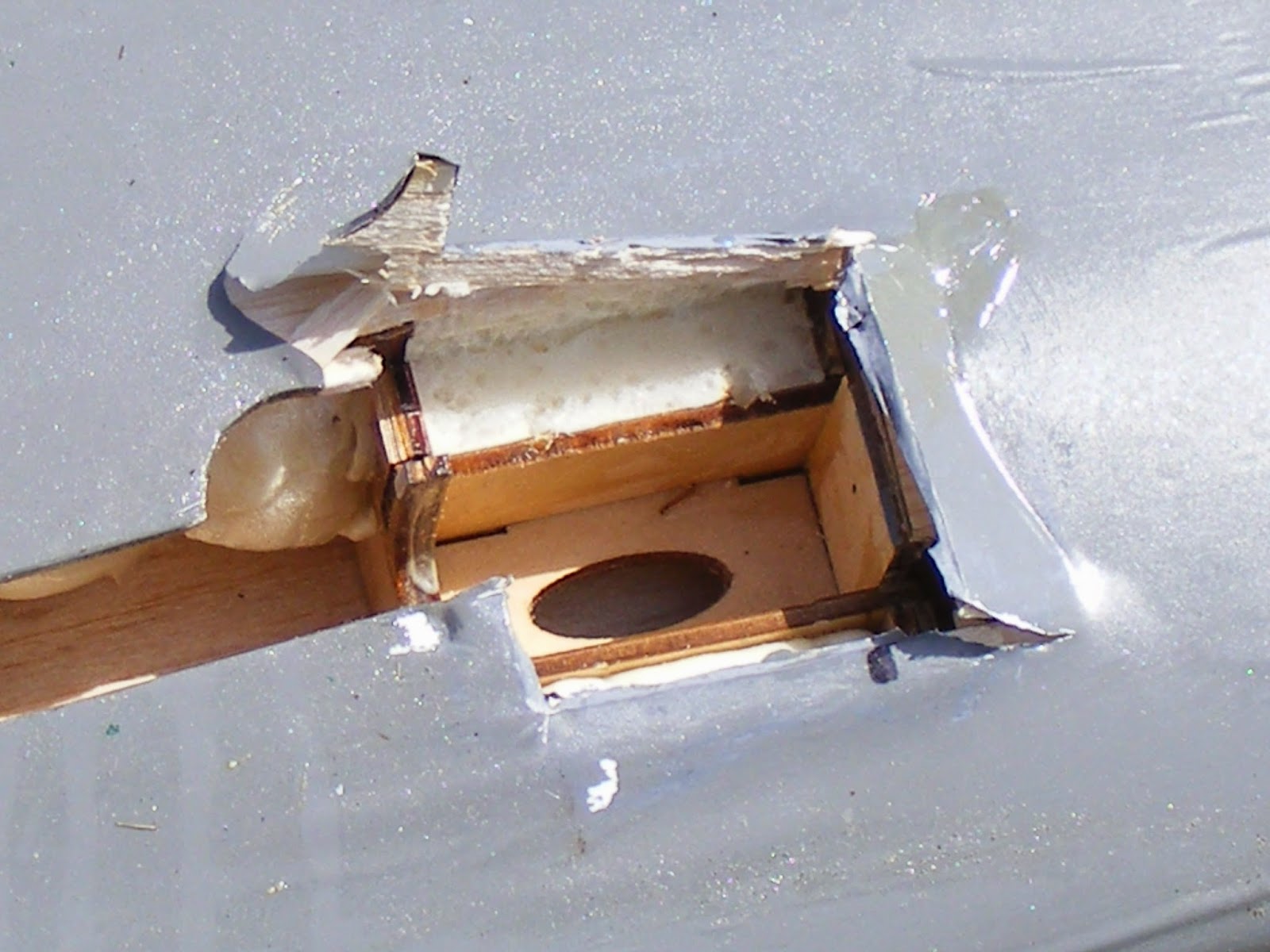 The foam was cut away so that 1 X 1/2 X 2 inch oak beams were epoxied into the cavities and making sure that there was a good bond to the plywood box. Then the plywood gear mounting beams was epoxied and screwed to the oak beams. The repair seemed to holdup well during taxi tests, but are yet to be tested in a landing.

Since these pictures were shot we have changed the engine and installed a small gas engine (DLE 20) in place of the Irvine 120.


All my flying buddies are seriously into gas power for their models; they say give up on your big fuel guzzling glow engines and switch to a gasser that runs reliably on pump gas. With these arguments in mind I decided to replace the big Irvine 20 cc glow engine with a DLE 20 gas engine.
Posted by davideo4301 at 9:12 AM