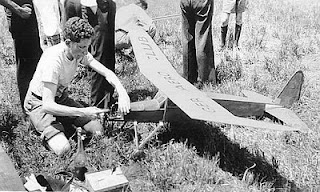 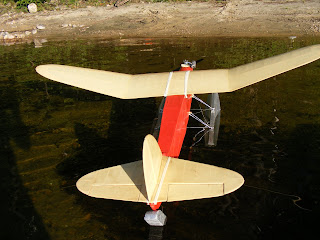 The Red Zephyr oldtimer is my favorite for relaxed model flying. I built my first Zephyr when I was 12 or 13 years old in 1949 but, in those days I couldnt afford the cost of powering it. After I finished it, I just hung the plane from my bedroom ceiling until I left home. I built the one in this video several years back from a short kit that I located online and powered it with an old O&R 60 running on full ignition. It was a struggle dealing with batteries and coils but I managed to get a dozen or so long flights that way. I used RC to control the tail and the engine kill switch. Here is what I have to say about relaxed model flying. My favorite model flying experience with this setup, was to lie flat on my back on a warm summer day and watch it spiral out of site vertically, then kill the engine and wait for it to reappear. That worked for a while until, one day, to my horror it did not descend and I could not find it any where in that wild blue yonder. Panicking now, I locked the rudder at full throw in an attempt to force it to enter a spiral decent. After a long anxious wait, I eventually spotted the Zephyr streaking to wards Earth. Quickly I centered the rudder, the Zephyr ballooned and entered a loop at the top with of which it flopped on its back, snapping the upper wing spar at the fuselage, causing the wing to fold with the tips touching at the top. Without any wing lift, she entered a vertical nose dive. The wing began to developed positive lift again as the speed increased and the wing gradually regained its normal shape as the two halves of the broken top spar came together, now in compression. For a few short seconds the Zephyr started a recovery from its death dive and I allowed myself to imagine a miracle happy ending with a safe landing in spite of the broken wing, but unfortunately it was not to be. The tension forces resulting from the rapid pull-up were just too much for the lower surface covering and it ripped in to pices with a bang allowing both wing panels to separate from the fuselage. The Zephyr was still a thousand plus feet high at this point and heading straight down at an alarming speed. Even under these circumstances I was able to control its course slightly, enough too fly it home. It impacted the ground a mere ten or twelve feet directly in front of me, blowing my prized Trexler 4 inch balloon tires in the process and rearranging the nose slightly. Ten minutes after the two wing panels were still fluttering back to earth at least a quarter of a mile from where I stood. They were eventually located a few weeks later in our far hay field when I mowed the hay with unusual care. I still fly that same Zephyr for relaxation, now fitted with floats, a modern two stroke glow engine and of course, reinforced wing spars. 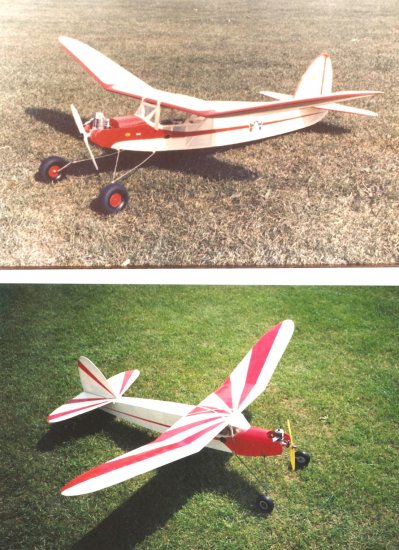