Breaking News: The Right Stuff Has Past

The Right Stuff
It was just after sunup on the morning of October 14, 1947, and as I walked into the hangar at Muroc Army Air Base in the California high desert, the XS-1 team presented me with a big raw carrot, a pair of glasses and a length of rope. The gifts were a whimsical allusion to a disagreement I'd had the previous evening with a horse. The horse won. I broke two ribs. And now, as iridescent fingers of sunlight gripped the eastern mountain rims, we made ready to take a stab at cracking the sound barrier–up until that point aviation's biggest hurdle.

The Bell XS-1 No. 1 streaked past the speed of sound that morning without too much fanfare–broken ribs notwithstanding. And when the Mach indicator stuttered off the scale barely 5 minutes after the drop from our mother B-29, America entered the second great age of aviation development.

READ THIS
How the B-29 Modernized the U.S. Air Force

We'd fly higher and faster in the XS-1 No. 1 in later months and years. Its sister ships would acquit themselves ably as the newly formed U.S. Air Force continued to "investigate the effects of higher Mach numbers.' And Edwards Air Force Base, formerly known as Muroc Army Air Base, would witness remarkable strides in supersonic and even transatmospheric flight.

But with the XS-1, later shortened to X-1, we were flying through uncharted territory, the "ugh-known' as we liked to call it. And as ominous as it seemed to us then, that was the whole point.

America was at war with Germany and Japan in December 1943 when a conference was called at the fledgling National Advisory Committee for Aeronautics (NACA, NASA's forerunner) in Washington. The subject was how to provide aerospace companies with better information on high-speed flight in order to improve aircraft design. A full-scale, high-speed aircraft was proposed that would help investigate compressability and control problems, powerplant issues and the effects of higher Mach and Reynolds numbers. It was thought that a full-scale airplane with a trained pilot at the controls would yield more accurate data than could be obtained in a wind tunnel. And, following the English experience with early air-breathing jet propulsion, the notion of using a conventional jet powerplant was advanced.

Discussions continued through 1944, but winning the war was first on everyone's agenda. It wasn't until March of 1945, with the war drawing to a close, that the project picked up momentum. Researchers concluded, however, that jet engines of the period weren't powerful enough to achieve the required speeds.

Rocket propulsion was explored–specifically, a turbo-pump-equipped rocket made by Reaction Motors Inc. Delivering 6,000 pounds of thrust, the acid-aniline-fueled engine was believed to be capable of boosting an airplane to the fringes of the known performance envelope. Ultimately, the Reaction Motors turbo pump became stalled in development, so another 4-chamber Reaction Motors engine, this one fueled by liquid oxygen and diluted ethyl alcohol, was slated for installation. A pressure system using nitrogen gas provided a basis for fuel delivery. This fallback meant the X-1 could carry only half the fuel originally anticipated, but at least the project could move ahead.

With an engine in place, Larry Bell of Bell Aircraft Corp. and chief design engineer Robert J. Woods could proceed on the design of the X-1. It was to be unlike any other airplane designed up to that day.

The Germans had experimented with rocket planes in the waning days of the war. The ME-163, with its HWK 509C engine, was credited with a top speed of around 600 mph. (The ME-262, with two jet engines, was clocked at 527 mph.) But the Bell X-1 would be far superior–with a clean, aerodynamic profile that whispered "power" even while dormant on the tarmac.

You get the idea that designing, maintaining–and particularly flying–these research tools was not without hazard. But despite the risks, the first X-1 flew like a dream. Its smooth, precise flight characteristics defined the plane's personality. I remember pulling three slow rolls on the first unpowered flight in midsummer 1947. And as we embarked on the quest to explore aviation's potential, fear—albeit subsurface—supplied a businesslike edge to the work. 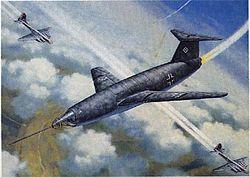