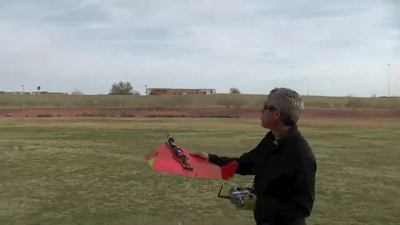 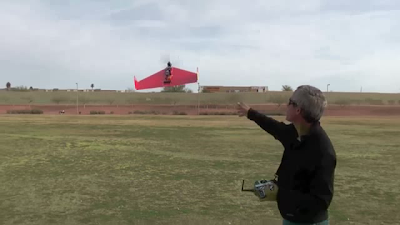 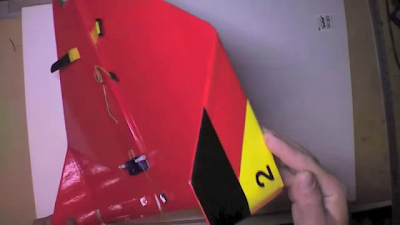 Published on 28 Mar 2012
GENERAL DETAILS AND BUILD TIPS:
There are many versions of the beloved flying wing. This particular model is made from a single piece of Dollar store foam board, pre-covered with packing tape, and assembled with hot glue and two-sided foam tape. Its mission is to go very fast with a medium-sized motor and 3-cell battery pack. It is easy to build, with only two straight wing cuts, two hinge cuts, and two score-fold-glue joints for the vertical stabilizers. The scale and style factor is pretty humble in order to keep the weight down and the build simple, but it can be made to look relatively cool enough with some nice colored packing tape. Wingspan 21", length 19", AUW 500-650g, speed 60-75 mph. I have used 1100kV and 1500kV 70g, 330 watt +/- motors with 8x6 APC props and 3-cell 220 0mAh battery packs and gotten very respectable performance. A 2200kV with 6x4 and a 130 0mAh pack was 400g and pretty quick as well. One could use a higher kV rating and/or cell count for faster speeds. 64 mm EDF works very well too, mounted on top, with a paper cup thrust tube. These can be very fast and nimble with a roll rate over 1000 degrees per second, so I would recommend having at least intermediate skills and low rates to start. Launch 1/2 throttle at 30 degree up-angle and trim while at altitude. The EDF does well with landing gear (nose wheel, tail skids).
Flying wing/delta wing C of G calculator:
http://fwcg.3dzone.dk/