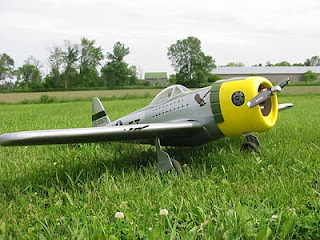 I have two versions of the Thunderbolt in my collection. The first one I acquired was a very early version kitted by TopFlite that could be built as either a razor back or bubble canopy version. This is a 60 size model Powered by Nitro burning Super Tiger 61 2-C Engine. Mine was built with the bubble canopy, with flaps and fixed landing gear. Originally the model had a single center mounted servo for aileron control but was later modified to duel outboard mounted servos to increase response time. The model is heavy and very prone to snap roll on take-off and was damaged and repaired on several occasions due to this type of accident. 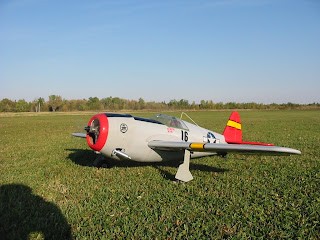 The Razor Back version is an 1/6 size ARF by Global. Equipped with a Nitro Burning Thunder Tiger 80 4-C Engine, mechanical retracts for main landing gear and on-board ignition. The model is, as the manufacturer says "The sweetest flying Warbird you could ever own" Constructed with a balsa built up fuselage, wing, and tail, it is very light and with the 80 size engine it can really scat.


Pica 1/6 size Spitfire
I purchased this old Warbird many years ago at a club auction for $75. The model at that time was powered with a balky old Super Tiger 60 2 stroke engine, which was really not powerful enough to reliably fly this heavy model. After two or three flights semi successful flights I crashed it on take-off, when the left wing suddenly stalled shortly after take-off; Attempts to regain control by applying opposite aileron were taken several times and each attempt precipitated successive snap rolls each more violent than the last. The last snap was quickly followed by a a head long nose dive into the ground, destroying the fuselage back to the cockpit . The plane was slowly rebuil a little bit at a time over the next 10-12 years which is sometimes of the way that I operate. Difficult unpleasant tasks are sometimes easiest when taken one step at a time, I find. The current Fox engine engine was installed when it suddenly became available the day I crashed my Sig, Goseny"s, Ryan red and white STA which was designed by the renowned Maxi Hessiler. The first flight after rebuilding was not totally successful and I was very lucky to wrestle it back to the ground in one piece. The problem this time was a very severe aft center of gravity condition. I have since added six iron weights from a diver's belt to the engine compartment which has brought the center of gravity forward to an acceptable position approximating the quarter cord position. I have just put in a very nice flight with the model with the cowl removed. All attempts to operate the engine after that flight have proved unsuccessful. I have since uncovered the source of the problem and the engine would start after I plugged an open hole in the crank case cover. Apparently an attachment screw had loosened and fallen out at the end of that flight. I find that the Fox 61 is not a good engine for modeler like myself; not because it is poorly designed but, because, Phillip's head screws were used to assemble it, instead of socket heads. The Phillip's can't be tightened enough to prevent them from loosening from vibration.


FW 190
This 40 year RC FW190 is still flying well with its OS 61 FSR 2 Stroke Engine, which can really turn up a storm , under cowl, even on a hot summer's day. Originally fitted with a Super tiger 56 the OS has been working reliably since installed 25 years ago without even having to adjust the fuel mixture setting. Judging from the way, the camouflage scheme hides it against the green background its a wonder that I can manage to control it. 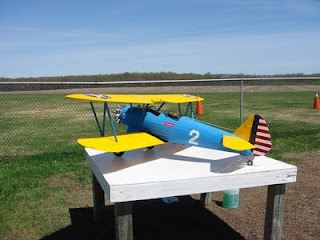 This aircraft is probably my favorite trainer aircraft. Back in the 1960's I attended a model airplane contest featuring scale A/C. The model which most impressed me was a PT-17 from a Sterling kit. I knew at that moment that I just had to have one someday. Then in the 1980's Sterling under the leadership of the founder's son turned out a new production run of the old PT-17 kit. Building from a box of balsa was not that attractive to me at that time since I had just moved in to the old farm house in Russell with a thousand things to maintain and a barn half full with 3 horses, I had no time or place to build the big biplane. Luckily I did have a good work friend who loved to build and was somewhat of a craftsman to boot, so I engaged him to construct the model for me. After a couple of years of waiting my Stearling was ready for flight. She flew straight as an arrow without any trim adjustments and to my delight landed with a constant sink rate and perfect flare. The big disappointment came when I walked up to her, it was then that I discovered that the landing gear had completely flattened out, even though the touchdown had been very gentle. When I tried to straighten the wheels I discovered to my horror that the wire reformed to it's original shape with almost no resistance. The wire was soft and not heat treated and it would have to be replaced. After much thought I came up with a practical repair which did not involve tearing apart the beautifully built structure. This repair which is far too complicated to describe here, involved pealing away the balsa wood strut fairings and attaching another reinforcing member fabricated from 5/32 music wire and fixing to the bulkhead at the wing leading edge via J bolts.
For a number of years I worked at Rockcliffe airbase home of Canada's Aviation Museum and on special occasions I treated myself to a ride.

Powered with a Thunder Tiger 52 4-C fully cowled, Nitro burning engine. Featuring full flying wires and on-board ignition. This ARF flies beautifully but the fully cowled engine if prone to overheating and some modifications will have to be made. There needs to be a larger cutout at the bottom of the cowl to let air to escape.

Now a days, like everyone else I have discovered how good the ARF's are:- 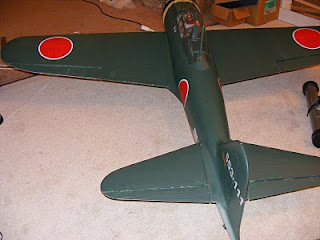 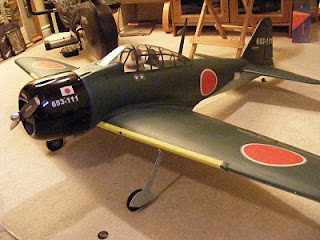 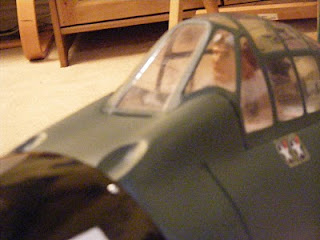 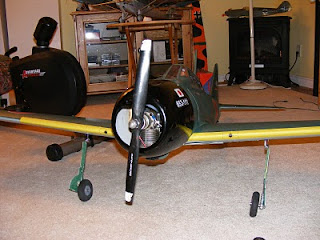 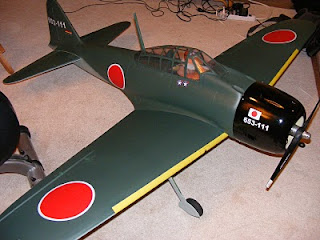 Just finished putting together my new Will Hobbies 120 Size Zero ARF Warbird. Although I am not a perfectionist when it comes to scale model aircraft (more of a semi scale guy I would say) This model looks good to my eye. I opted for retractable landing gear over the fixed gear material supplied with the kit. The 60-120 gear legs that I installed were to short fit the wheel wells and had to be lengthened by about one half inch to fit properly. I accomplished this by using a pair of Dubro Axel fittings which was a little unorthodox in its application. I threaded 6-32 bolts into the threaded hole at the bottom of the fitting, intended for the axle locking grub screws and fitted regular axle fittings to the screws. The Engine mount set-up allows me to run a 120 four stroke inverted or a 90 two stroke side mounted with a Pitts style muffler located at the bottom of the cowl. The pictures show an Enya 120 four stroke fitted. The completed model ready to fly (wet) weighs 11.33 pounds or 5.14 KG. The center of gravity is a little too far aft and will have to be moved forward about a half inch before attempting a flight.